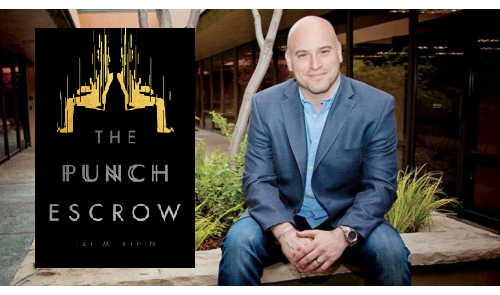 Please save the date for Tal Klein's Chicago book release and signing of The Punch Escrow.

Advance praise for The Punch Escrow

"An alt-futuristic hard-science thriller with twists and turns you'll never see coming. I couldn't put it down." —Felicia Day, founder of Geek & Sundry

“The Punch Escrow will have you rooting for its plucky, sarcastic hero as he bounces between religious fanatics, secret agents, corporate hacks and megalomaniacs in a quest to get his life back.” —Robert Kroese, author of Starship Grifters and The Big Sheep

"This book angered me to my core because it’s based on an idea that should have occurred to me. The fact that Tal executed it so well, and made such a page-turner out of it, just adds insult to injury." —Scott Meyer, author of the comic fantasy series Magic 2.0

It’s the year 2147. Advancements in nanotechnology have enabled us to control aging. We’ve genetically engineered mosquitoes to feast on carbon fumes instead of blood, ending air pollution. And teleportation has become the ideal mode of transportation, offered exclusively by International Transport—a secretive firm headquartered in New York City. Their slogan:

Joel Byram is an average twenty-second century guy. He spends his days training artificial-intelligence engines to act more human, jamming out to 1980’s new wave music and trying to salvage his deteriorating marriage. He’s pretty much an everyday guy with everyday problems—
until he’s accidentally duplicated while teleporting.   Now Joel must outsmart the shadowy organization that controls teleportation, outrun the religious sect out to destroy it, and find a way to get back to the woman he loves in a world that now has two of him.

Genre-busting, ambitious, and irresistibly charming, THE PUNCH ESCROW will speak to fans of the man-against- the-machine narratives that have driven thrillers from North by Northwest to Enemy of the State, to anyone who has lost themselves in the love story at the core of Die Hard , to readers who loved the good natured humor of Ready Player One and The Martian, to the geek inside every reader that will thrill to
the best-conceived near-future world since Gattaca.

Tal M. Klein was born in Israel, grew up in New York, and currently lives in Detroit with his wife and two daughters. When she was five years old, his daughter Iris wrote a book called I’m a Bunch of Dinosaurs that went on to become one of the most successful children's book projects on Kickstarter —something that Tal explained to Iris by telling her, “your book made lots of kids happy.” Iris then asked Tal, "Daddy, why don't you write a book that makes lots of grownups happy?" Tal mulled this over for a few years, and eventually wrote his first book, The Punch Escrow. It won the Inkshares Geek & Sundry Hard Science Fiction publishing contest, and will be the first book published on the Geek & Sundry imprint.

Copies of the book will be available at the event. You can pre-order today for in-store pickup!