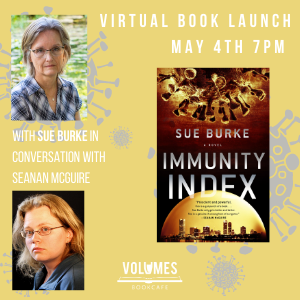 Join us for the book launch of Sue Burke's Immunity Index!

It is not secret that we are big fans of Sue Burke here at Volumes. We loved her duology of Semiosis and Interference. We can't wait to celebrate her newest book Immunity Index! She will be joined by the award winning Seanan McGuire!

Tickets for this event are free, but you can purchase a signed copy of Sue's newest book as a ticket add-on!

In a US facing growing food shortages, stark inequality, and a growing fascist government, three perfectly normal young women are about to find out that they share a great deal in common.

Their creator, the gifted geneticist Peng, made them that way--before such things were outlawed.

Rumors of a virus make their way through an unprotected population on the verge of rebellion, only to have it turn deadly.

As the women fight to stay alive and help, Peng races to find a cure--and the cover up behind the virus.

"This is up there with Ursula K. Le Guin: science fiction at its most fascinating and most humane."-- Thrillist

"A fascinating world."-- The Verge

"A magnetic meditation on biochemistry and humanity."-- Locus Online

"Sharp, evocative . . . Semiosis unfolds the old science fiction idea of first contact in ways that are both traditional and subversive."-- The Christian Science Monitor

Burke's world building is exceptional, and her ability to combine the intricacies of colonization with the science of botany and theories of mutualism and predation is astounding. -- Booklist

ABOUT SUE BURKE: SUE BURKE spent many years working as a reporter and editor for a variety of newspapers and magazines before writing her critically acclaimed Semiosis. A Clarion workshop alumnus, Burke has published more than thirty short stories in addition to working extensively as a literary translator. She lives in Chicago.

ABOUT SEANAN MCGUIRE: SEANAN McGUIRE is the author of the Hugo, Nebula, Alex, and Locus Award-winning Wayward Children series; the October Daye series; the InCryptid series; the delightfully dark Middlegame; and other works. She also writes comics for Marvel, darker fiction as Mira Grant, and younger fiction as A. Deborah Baker. Seanan lives in Seattle with her cats, a vast collection of creepy dolls, horror movies, and sufficient books to qualify her as a fire hazard. She won the 2010 John W. Campbell Award for Best New Writer, and in 2013 became the first person to appear five times on the same Hugo ballot.