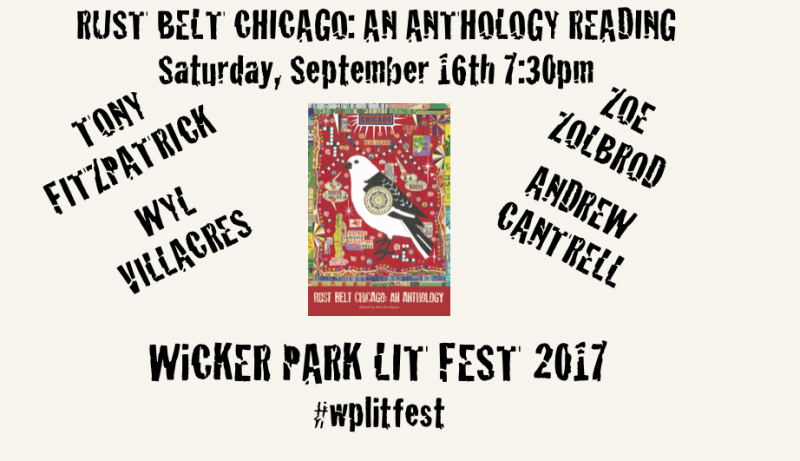 Join us Wicker Park Lit Fest Weekend for a night celebrating these amazing writers and artists - all a part of this incredible anthology from Belt Publishing.

About the Anthology:
Chicago is built on a foundation of meat and railroads and steel, but its identity long ago stretched past manufacturing. A city of opportunity from the get-go, it continues to lure new residents from around the world, and from across a region rocked by recession and deindustrialization. But the problems that plague the Belt don’t disappear once you get past Gary. In fact, they’re often amplified. Chicago’s glittering downtown towers stand in sharp contrast to the struggling south and west sides. A city defined by movement that’s the anchor of the Midwest, bound to its neighbors by a shared ecosystem and economy, Chicago’s complicated – both of the Belt and beyond it. Which makes it a perfect subject for a book.


TONY FITZPATRICK
Tony Fitzpatrick is a Chicago-based artist best known for his multimedia collages, printmaking, paintings, and drawings. Fitzpatrick’s works are inspired by Chicago street culture, cities he has traveled to, children’s books, tattoo designs, and folk art. Fitzpatrick has authored or illustrated eight books of art and poetry, and, for the last three years, has written a column for Newcity. Fitzpatrick’s art appears in the Museum of Modern Art in New York City, the Museum of Contemporary Art in Chicago, and the National Museum of American Art in Washington DC. The Neville Brothers’ album Yellow Moon and Steve Earle’s albums El Corazón and The Revolution Starts Now also feature Fitzpatrick’s art. In 1992, Fitzpatrick opened a Chicago-based printmaking studio, Big Cat Press, which exists today as the artist exhibition space Firecat Projects. Before making a living as an artist, Fitzpatrick worked as a radio host, bartender, boxer, construction worker, and film and stage actor.

ZOE ZOLBROD
Zoe Zolbrod’s work has appeared in Salon, The Nervous Breakdown, The Weeklings, and The Rumpus. Her debut novel Currency won a 2010 Nobbie Award and received an honorable mention by Friends of American Writers. Her book THE TELLING (Curbside Press 2016) was a Chicago Review of Books Finalist. Zoe lives in Evanston, IL with her husband, son, and daughter.

ANDREW CANTRELL is the author of Stratigraphy (2015). A Pushcart Prize nominee, his poems and performance texts have been published widely in journals and anthologies. He has taught literature and writing at the University of Illinois, and facilitated classes and workshops for union members across the Midwest. Originally from Atlanta, GA, he lives in Chicago where he organizes educational workers and serves as Secretary of the Chicago News Guild.


WYL VILLACRES is a bartender from Chicago. He is the author of Bottom of the Ninth (WhiskeyPaper, 2015) and his work has appeared in The Rumpus, McSweeney's, and the Best of the Netanthology, among others. Find him on twitter: @wyllinois.

KARI LYNDERSON is a Chicago reporter, author, and journalism instructor at Northwestern University, where she is fellowship director of the Social Justice News Nexus. She was previously a staff writer for The Washington Post out of the Midwest bureau and her work has also appeared in The New York Times, The Economist, The Guardian, People Magazine, the Chicago Reader, Discover and other publications. She currently is a staff writer at Midwest Energy News. Her books include Mayor 1%: Rahm Emanuel and the Rise of Chicago’s 99% and Closing the Cloud Factories: Lessons from the Fight to Shut Down Chicago’s Coal Plants. One of those coal plants is in the Pilsen neighborhood where Kari lives, and where she leads mural tours and sometimes frequents the remaining local bars; more at www.karilydersen.net.