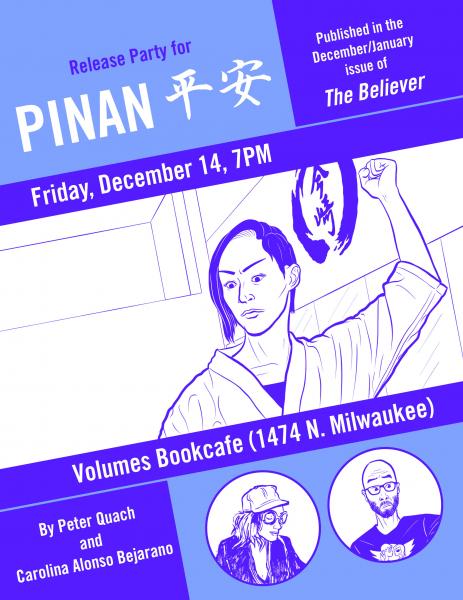 Peter Quach and Carolina Alonso Bejarano have a forthcoming 15 page comic in the December/January issue of THE BELIEVER. They'll be performing/showing their work Friday, December 14th!


Carolina Alonso Bejarano was born in Bogotá and she is a professor in the Latino and Caribbean Studies Department at Rutgers University. She is a feminist organizer, writer and translator. Her first book, Decolonizing Ethnography: Undocumented Immigrants and New Directions in Social Science is forthcoming from Duke University Press. She is a collective member of Sangría Editora, a bilingual publishing house based in New York City and Santiago de Chile, and in her spare time she works as a DJ in the Tri-state area.

Peter Quach is a comic book artist, illustrator, and graphic designer based in Chicago, IL. His comic I Am a Racist (And so Can You) was a notable comic in the Best American Comics 2013 anthology. His other works include Transit (2009), Freedman (2011), Temporary (2013), and the webcomics Gumdrops (2014–17) and But by Laughter (2017-). He is also a collective member of Sangría Editora, a bilingual publishing house based in New York City and Santiago de Chile.