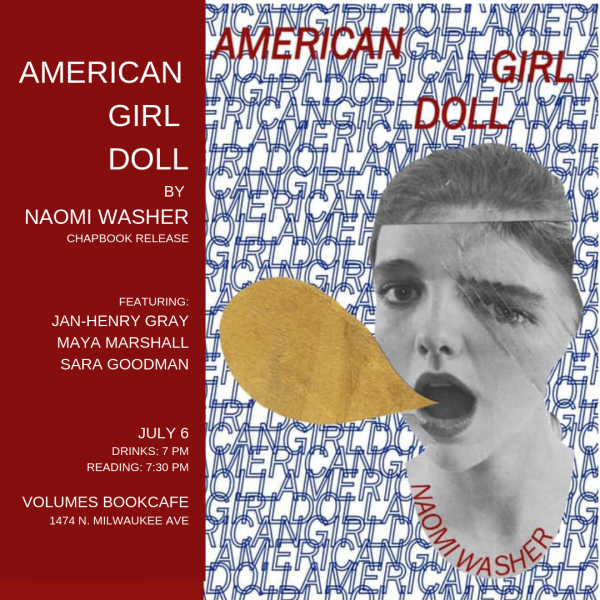 In apostrophe reminiscent of Ginsberg's "America," Washer's AMERICAN GIRL DOLL (Ursus Americanus Press) addresses the conditions, frustrations, and expectations of our monolithic and problematic country through a lens that seems both extrinsic and intrinsic, the self being called into the same rhetorical criticism as the setting that conditioned it.

Naomi Washer's other chapbooks include Phantoms (dancing girl press, 2019) and a translation from the Spanish of Sebastián Jiménez Galindo’s Experimental Gardening Manual: create your own habitat in thirty-something simple steps (Toad Press, 2019). Her work has appeared in Court Green, Gold Wake Live, Pithead Chapel, Asymptote, Sundog Lit, Split Lip Magazine, and other journals. She has been awarded fellowships and residencies from Yaddo, Vermont Studio Center, Studio Faire and Chateau d’Orquevaux in France, and Columbia College Chicago where she earned her MFA in Nonfiction. In 2019, she was named one of 30 Writers to Watch by the Guild Literary Complex. She lives in Chicago where she is the editor and publisher of Ghost Proposal. www.naomiwasher.com @naomiwasher

Jan-Henry Gray is the author of Documents, chosen by D.A. Powell as the winner of BOA Editions’ A. Poulin, Jr. Poetry Prize. His chapbook, Selected Emails, is out from speCt! Books and his poems are published in many journals, including Nepantla: An Anthology for Queer Poets of Color. Born in the Philippines and raised in California, Jan has lived undocumented in the US for more than 32 years. In Chicago, he co-hosts Meanwhile, a live zine-making and storytelling show.

Maya Marshall is a writer and an editor. She is co-founder of underbellymag.com, the journal on the practical magic of poetic revision. Marshall has earned fellowships from MacDowell, Vermont Studio Center, Callaloo, Cave Canem,  The Wateringhole, and the Community of Writers. She works as a manuscript editor for Haymarket Books and serves as a senior editor for [PANK]. Her poems have appeared in RHINO, Potomac Review, Blackbird and elsewhere.

Sara Goodman is a writer and new media artist. They are the author of the full-length poetry book Starfish, published by The Lettered Streets Press, and the chapbook Universal Texture published by Dynatox Ministries. Sara is the co-founder of the New Media collective S H R I N E and one half of AV Duos Interference// , ethereal_interface, and Cruising Utopia. Sara's work investigates the way hardware, software, and interfaces influence social behavior as well as aesthetics, providing insight into contemporary American culture and politics.