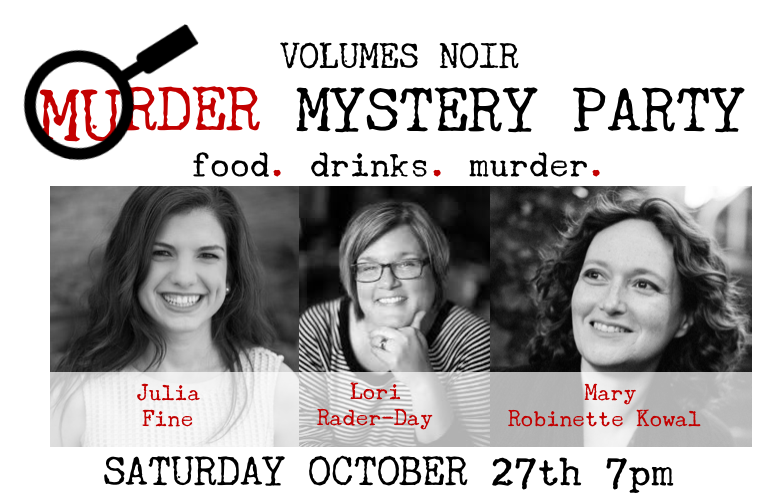 Join us for the first ever Volumes Noir Murder Mystery Party. Along with Sisters in Crime and Chicago Review of Books, we bring you a Halloween night filled with food, drinks, trivia, sppoky stories and a full-fledged murder-mystery game!

Can you solve the crime with the help of these three authors? Lori Rader Day, Julia Fine, and Mary Robinette Kowal will be on hand to help solve along with you - and provide a dose of awesome, because these ladies are pretty great.

The night will begin with trivia and food!

Your ticket includes a buffet of noir-worthy food & desserts!

The mystery game will unfold soon thereafter, where you, and all in attendance that night will work together (and apart) to find the murderer(s)! There will be riddles! There will be loads of fun!

There will be a costume contest for the best noir or literary mystery-ish character in attendance!

Mary Robinette Kowal is the author of The Glamourist Histories series, Ghost Talkers, and the Lady Astronaut duology. She’s a member of the award-winning podcast Writing Excuses and has received the Campbell Award for Best New Writer, three Hugo awards, the RT Reviews award for Best Fantasy Novel. Her stories appear in Asimov’s, Clarkesworld, and several Year’s Best anthologies. Mary Robinette, a professional puppeteer, also performs as a voice actor (SAG/AFTRA), recording fiction for authors including Seanan McGuire, Cory Doctorow, and John Scalzi. She lives in Chicago with her husband Rob and over a dozen manual typewriters. Visit maryrobinettekowal.com

Julia Fine is the author of the 2018 debut What Should Be Wild. She teaches writing at DePaul University and is a recent graduate of Columbia College Chicago’s MFA program. She lives in Chicago with her husband and their son.

The Day I Died: A Novel (Paperback)

What Should Be Wild: A Novel (Hardcover)