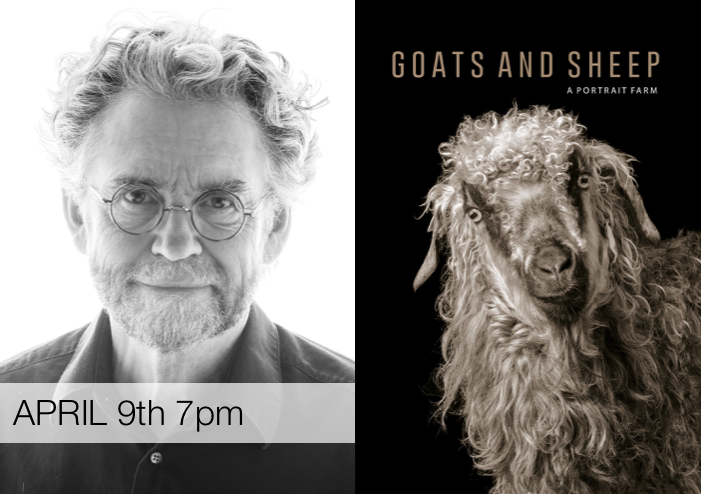 Join us April 9th as we celebrate the release of Chicago photographer Kevin Horan's book GOATS AND SHEEP: A Portrait Farm. This is an incredible book of photography and essays by Elena Passarello (Let Me Clear My Throat 2012). We are so excited to welcome Kevin in conversation with award winning author Jane Hamilton.

ABOUT KEVIN: Horan's work was chosen for the Top 50 of Photolucida Critical Mass in 2014. It has shown at PDNB Gallery in Dallas, Kinescope Gallery in New York, Edition One Gallery in Santa Fe, EBK Gallery in Hartford, and Pictura Gallery in Bloomington, Ind.

His work is in collections of the Santa Barbara Museum of Art, the Federal Reserve Bank of Chicago, the Comer Archive at the University of Illinois at Chicago, the National Park Service and the Museum of Contemporary Photography, Chicago. A former photojournalist, Horan's work has been published in LIFE, Time, The New York Times Magazine, Smithsonian, National Geographic, and numerous other magazines.

He was based in Chicago from 1976 to 2006, whence he traveled to assignments worldwide. His coverage included presidential campaigns, Amazon basin development, village life in Russia, housing projects in the U.S., Hurricane Katrina, the Iditarod sled dog race, and following a dollar bill for a week. For more information, go here.

"Goats and sheep have served us from the earliest of times. They have walked the world with us. By paying attention, we honor the musings of the sheep and the jests of the goats. And so these pictures make a kind of meditation on our earthly brother- and sisterhood. When we draw a sharp line dividing humans from the rest of life, we make the world
a smaller place - for ourselves. Why on earth would we want to do that?"

When American photographer Kevin Horan moved from the city of Chicago to rural Whidbey Island in the state of Washington, he discovered among the local residents a flock of goats and sheep, who greeted him each day in front of his house as friendly neighbors do. The chorus of sounds they made suggested they were not just herd animals, but perhaps individuals as well. He writes: "Their voices were all so different - sopranos and baritones, shouts and murmurs, rebukes and pleas - that I thought of them as not just a flock but a tight-knit group of individuals."

Experienced in portraiture, Horan decided to photograph his new neighbors in his studio, as though they were privileged clients just like aristocratic country gentlemen and ladies. For practical reasons, he brought the studio to them on the farms where they lived. When it was time to take the picture after setting up the lighting and backdrop, Horan did not pose his subjects. Instead, he waited and watched until the moment the animal revealed itself to him in all of his or her glory. His exquisite resulting images are published in Goats and Sheep. A Portrait Farm (5 Continents Editions, March 2019).

About Jane Hamilton:
Jane Hamilton is the author of The Book of Ruth, winner of the PEN/Hemingway Award for First Fiction; A Map of the World, a New York Times Notable Book of the Year and named one of the top ten books of the year by Entertainment Weekly, Publishers Weekly, the Miami Herald, and People magazine; Disobedience; and The Short History of a Prince. She lives in Rochester, Wisconsin.