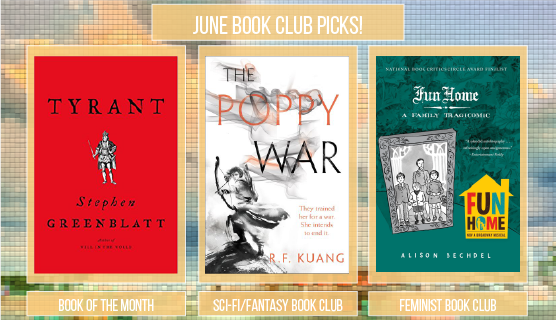 The (sometimes) sunny days, followed by the sudden temperature drops, the lightning shows, and the pouring rain - does anyone else love a good storm as much as we do?

Duck under an awning or into a deserted bar and wait out the storm with one of these!

Book of the Month: Tyrant: Shakespeare on Politics by Stephen Greenblatt

TL;DR: Shakespeare wrote of heck of a lot of tyrannical leaders. Greenblatt dives into the psyche behind their lust for absolute power.

6:30pm - It's time for a little non-fiction! Whether you anxiously scan headlines every day or not, chances are you've been wondering,  How did we get here? Why are they like that?  So have we, but we decided to keep it politics-adjacent this month, and instead of diving into our specific political climate, we're diving into the most classic of classic literature, and seeing what Shakespeare had to say on the matter.

TL;DR: Epic military fantasy inspired by the bloody history of China's twentieth century and filled with treachery and magic and gods.

7:00pm - Ask and ye shall recieve! This month's pick is sprawling grimdark-adjacent fantasy novel. It's a debut that was the subject of an intense bidding war for publishing rights, and all signs point to it being just as good as we hoped. It's "A complex, sprawling, ambitious novel, part coming of age and part tragedy of power, that uses motifs and influences from the 20th century. It reminds me tonally of Lara Elena Donnelly's Amberlough and Joe Abercrombie's Half a King, [and] in setting of K. Arsenault Rivera's The Tiger's Daughter," according to Tor.com. We love Amberlough! We love The Tiger's Daughter! I'm diving into my copy ASAP and so should you!

The Poppy War: A Novel (Hardcover)