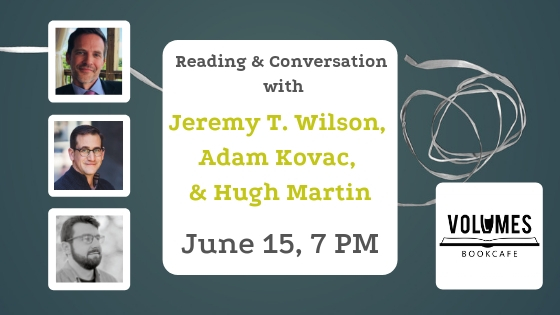 Join us in a reading and conversation with authors Jeremy T. Wilson, Adam Kovac, and Hugh Martin on Saturday, June 15th at 7 PM!

Jeremy T. Wilson is the author of the short story collection Adult Teeth. He is a former winner of the Chicago Tribune’s Nelson Algren Award for short fiction, and his stories have appeared or are forthcoming in literary magazines such as The Carolina Quarterly, The Florida Review, Hobart, Sonora Review, Third Coast and other publications. He holds an MFA from Northwestern University and teaches creative writing at The Chicago High School for the Arts. He lives in Evanston, Illinois with his wife and daughter.

Adam Kovac served in the U.S. Army infantry, with deployments to Panama, Haiti, Iraq and Afghanistan. A former journalist, he's also covered the crime and court beats for newspapers in Indiana, Florida and Illinois. He lives in the Chicago suburbs with his wife and son.

Hugh Martin is originally from northeast Ohio and he spent six years in the Army National Guard and deployed to Iraq in 2004. He is the author of So, How Was The War? (Kent State UP, 2010), The Stick Soldiers (BOA Editions, 2013), and In Country (BOA Editions, 2018). He is the recipient of a Pushcart Prize, a Yaddo residency, a Wallace Stegner Fellowship from Stanford University, and a Sewanee Writers' Conference Fellowship. He was the winner of the 11th annual A. Poulin Jr. Poetry Prize from BOA Editions, Ltd., and the winner of the Jeff Sharlet Memorial Award from The Iowa Review. His work has appeared in many places including The Kenyon Review, Grantland, The American Poetry Review, The New Yorker, and The Sun. Martin graduated from Muskingum University and he has an MFA from Arizona State University. He was the 2014-15 Emerging Writer Lecturer at Gettysburg College and he now teaches at Ohio University where he's completing a Ph.D.