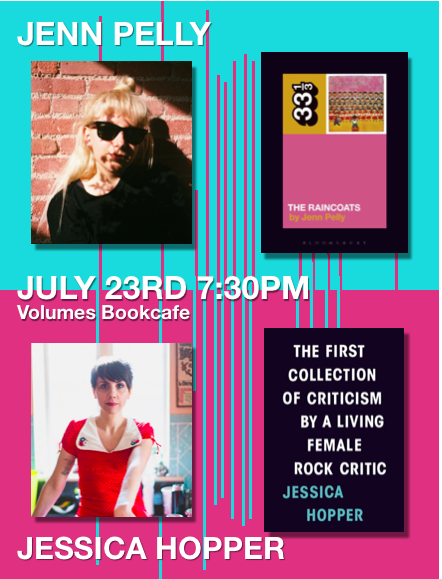 Music critic and Pitchfork's own Jenn Pelly will be here post-Pitchfork to chat about her 33.3 book THE RAINCOATS. She will be joined by music critic and author of THE FIRST COLLECTION OF CRITICISM BY A LIVING FEMALE ROCK CRITIC, Jessica Hopper.

About Pelly's book, THE RAINCOATS -
In this short book--the first on the Raincoats--author Jenn Pelly tells the story of the group's audacious debut album, which Kurt Cobain once called 'wonderfully classic scripture.' Pelly builds on rare archival materials and extensive interviews with members of the [group], Sleater-Kinney, Bikini Kill, Hole, Scritti Politti, Gang of Four, and more.

“One of the strangest and most inspiring of punk rock stories, finally brought into the light. Jenn Pelly's brilliant book is a crucial work of history, not just music history, opening up the story of how four women formed a band and created a legend, passed from fan to fan around the world.”
—Rob Sheffield, author of Love Is a Mixtape and Dreaming the Beatles

Jessica Hopper is a music and culture critic based in Chicago. Her work has been included in Best Music Writing 2004, 2005, 2007, 2010 and 2011. Her book, The Girls Guide to Rocking, was named one of 2009’s Notable Books for Young Readers by the American Library Association. The First Collection of Criticism by a Living Female Rock Critic, a compilation of her essays, reported pieces, zines, and reviews, was published in May 2015