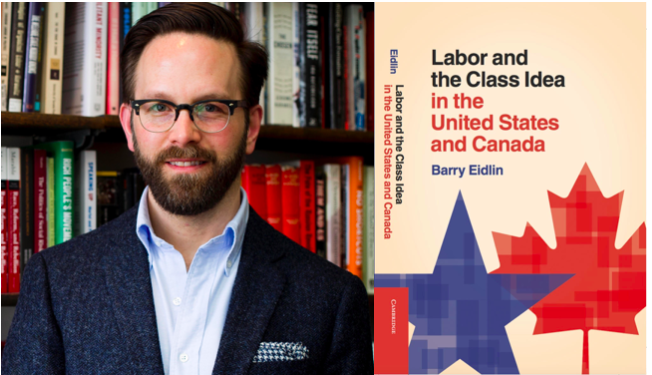 Join us October 20th as we welcome author of LABOR AND THE CLASS IDEA In The United States and Canada, Barry Eidlin, in conversation with Managing Editor of Jacobin Magazine, Micah Uetricht.

ABOUT THE BOOK: Why are unions weaker in the U.S. than in Canada, despite the two countries’ socio-economic similarities Many view this cross-border difference as a byproduct of long-standing differences in political cultures and institutions. But using detailed archival and statistical data, I find this divergence is relatively recent, resulting from different ruling party responses to working class upsurge in both countries during the Great Depression and World War II. In Canada, an initially more hostile state response ended up embedding “the class idea” the idea of class as a salient, legitimate political category—more deeply in policies, policies, and practices than in the U.S., where class interests were reduced to “special interests.” I illustrate this through comparative studies of party-class relations, postwar Red scares, and divergence in labor policy between the two countries.


ABOUT BARRY: Barry Eidlin is an Assistant Professor of Sociology at McGill University, a longtime member of Solidarity, and a new member of DSA. He is a comparative historical sociologist interested in the study of class, politics, social movements, and social change. His book, Labor and the Class
Idea in the United States and Canada was published by Cambridge University Press in 2018. Other research has been published in the American Sociological Review, Politics & Society, Sociology Compass, and Labor History, among other venues. He also comments regularly in various media outlets on labor politics and policy. Prior to embarking on his academic career, he spent several years as an organizer with Teamsters for a Democratic Union.

MICAH UETRICHT: Micah Uetricht is the managing editor of Jacobin. He is the author of Strike for America: Chicago Teachers Against Austerity.