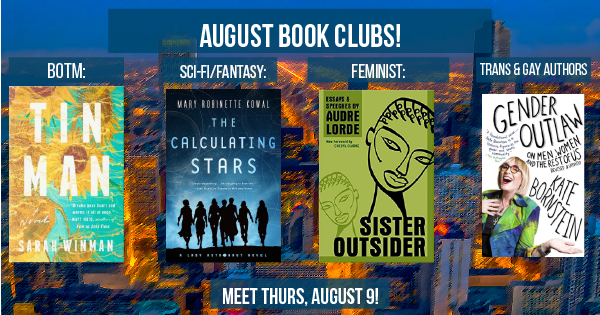 The Dog Days are here!

We have some exciting news to fuel your early morning/late afternoon/escaping heat reading!

Book of the Month: Tin Man by Sarah Winman

6:30pm - Ellis and Michael are twelve-year-old boys when they first become friends, and for a long time it is just the two of them, cycling the streets of Oxford, teaching themselves how to swim, discovering poetry, and dodging the fists of overbearing fathers. And then one day this closest of friendships grows into something more.

But then we fast-forward a decade or so, to find that Ellis is married to Annie, and Michael is nowhere in sight. Which leads to the question: What happened in the years between?

TL;DR: Mathmatician and WASP pilot Elma York is determined to make a space for herself - and all women - in the rapidly accelerating space program aiming to colonize the Moon.

7:00pm - An abolutely engrossing alternate history of space travel. Set in the 1950's, this book doesn't shy away from the racism and sexism of the time. She also tackles anxiety. The science is all beautifully sound. I wish I could join the lady astronauts Club! -Brooke

7:30pm - Presenting the essential writings of black lesbian poet and feminist writer Audre Lorde, Sister Outsider celebrates an influential voice in twentieth-century literature. In this charged collection of fifteen essays and speeches, Lorde takes on sexism, racism, ageism, homophobia, and class, and propounds social difference as a vehicle for action and change. Her prose is incisive, unflinching, and lyrical, reflecting struggle but ultimately offering messages of hope. This commemorative edition includes a new foreword by Lorde-scholar and poet Cheryl Clarke, who celebrates the ways in which Lorde's philosophies resonate more than twenty years after they were first published.

Trans & Gay Authors: Gender Outlaw: On Men, Women, and the Rest of Us by Kate Bornstein

8:00pm -  Kate Bornstein ushers readers on a funny, fearless, and wonderfully scenic journey across the terrains of gender and identity. On one level, Gender Outlaw details Bornstein's transformation from heterosexual male to lesbian woman, from a one-time IBM salesperson to a playwright and performance artist. But this particular coming-of-age story is also a provocative investigation into our notions of male and female, from a self-described nonbinary transfeminine diesel femme dyke who never stops questioning our cultural assumptions. Gender Outlaw was decades ahead of its time when it was first published in 1994. Now, some twenty-odd years later, this book stands as both a classic and a still-revolutionary work--one that continues to push us gently but profoundly to the furthest borders of the gender frontier.

Gender Outlaw: On Men, Women, and the Rest of Us (Paperback)