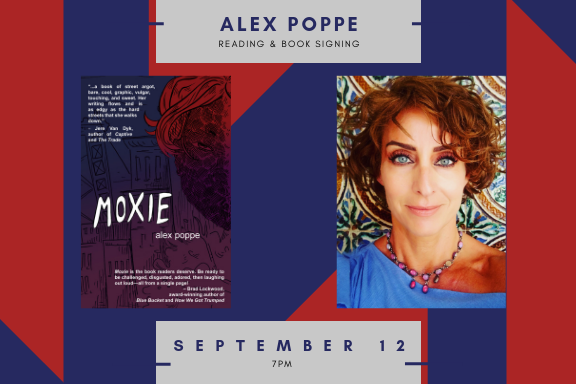 Chicago native, Alex Poppe will be in town to release her novel, Moxie, along with Patricia Ann McNair, Thursday September 12th!
In Moxie, Jax, a magazine-cover model, has had half her face destroyed in a bomb blast. Drowning in whiskey and self-loathing, she must rebuild her life now that her beauty is gone. Part love letter to New York City, part commentary on issues of social injustice, Moxie is a timely and raw portrayal of a self-destructive quest for identity and redemption in a liminal world.  In its review, Booklist wrote: “Poppe’s writing is brisk, raw, and unflinching.
Alex is a sharp cultural observer whose writing is influenced by world events. In this novel she creates sub-plots that dive into some of today’s most disturbing news stories—transgender violence, terrorism, discriminatory behavior towards women, gays, and people of color; illegal immigration, and the need for criminal justice reform as young men and women of color continue to be incarcerated for years for committing minor offenses, a practice that frequently destroys their lives. Yet her novel is laced with humor, and she has a flair for dialogue, clearly the result of her years as a performer.
Alex Poppe is also the author of Girl, World, (2017), a story collection which was named a 35 Over 35 Debut Book Award winner, First Horizon Award finalist, Montaigne Medal finalist, and was short-listed for the Eric Hoffer Grand Prize. It was also awarded an Honorable Mention in General Fiction from the Eric Hoffer Awards. Her short fiction has been a finalist for Glimmer Train’s Family Matters contest, a nominee for the Pushcart Prize, and commended for the Baker Prize. Her non-fiction was named a Best of the Net nominee (2016), a finalist for Hot Metal Bridge’s Social Justice Writing contest, and has appeared in Bust and Bella Caledonia. She is an academic writing lecturer at the American University of Iraq, Sulaimani and is working on her third book of fiction with support from Can Serrat International Art Residency and Asociacíon Cultural LINEA DE COSTA DUPLO Artist in Residency programs.
Patricia Ann McNair has managed a gas station, sold pots and pans door to door, tended bar and breaded mushrooms, worked on the trading floor of the Chicago Mercantile Exchange, taught aerobics, and now writes fiction and nonfiction. Booklist calls her “…an irresistible personal essayist of refreshing candor,  vibrant openheartedness, rueful humor, and unassuming wisdom.” McNair’s The Temple of Air, stories, won Southern Illinois University Devil’s Kitchen Readers Award, Chicago Writers Association Book of the Year, and was a finalist for Society of Midland Authors Adult Fiction Award. And These Are The Good Times, essays, was a Montaigne Medal finalist. McNair’s work has been published widely, including in Brevity, Creative Nonfiction, Fourth Genre, River Teeth, The Good Men Project, Superstition Review, Solstice Lit Mag, Hypertext and other journals and magazines. She is a contributor to The Rumpus and The Washington Independent Review of Books. She was named to Chicago’s NewCity Lit50 list, and to Guild Complex’s 30 Writers to Watch. McNair teaches graduate and undergraduate students at Columbia College Chicago where she directs the undergraduate creative writing programs.