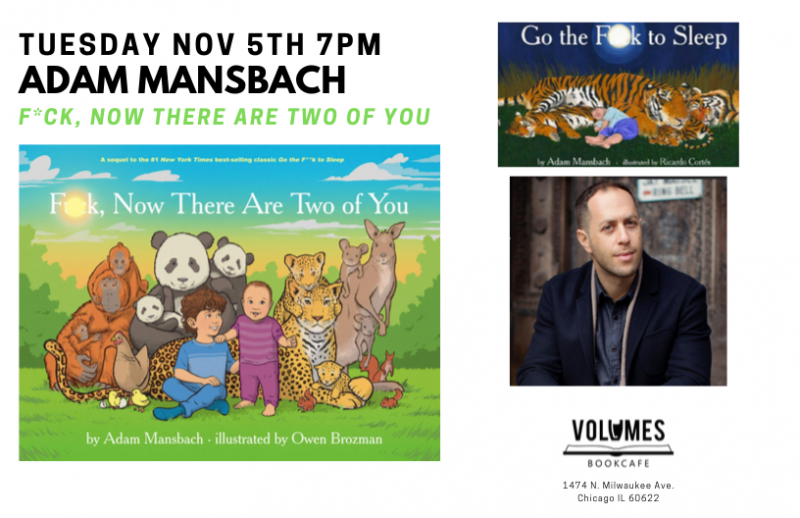 Join us November 5th as we welcome Adam Mansbach, the bestselling author of the hit books GO THE F*CK TO SLEEP and YOU HAVE TO F*CKING EAT. The newest addition to these adult bedtime stories if F*ck, Now There are Two of You! Adam will be joined by local poet, educator and man about town Kevin Coval.
There may or may not be a live recoding of Coval's Corner Store Podcast for WGN.

Adam Mansbach is a novelist, screenwriter, cultural critic and humorist. He is the author of the #1 New York Times bestseller Go the Fuck to Sleep, which has been translated into forty languages, named Time Magazine's 2011 "Thing of the Year," and sold over two million copies worldwide. The 2014 sequel, "You Have to Fucking Eat," is also a New York Times bestseller.

His book with co-author Dave Barry, A Field Guide to the Jewish People: Who They Are, Where They Come From, What to Feed Them...and Much More. Maybe Too Much More, was published in September 2019 from Flatiron Books.

Mansbach's previous novels include The End of the Jews (2008) which won the California Book Award, and the cult classic Angry Black White Boy, or the Miscegenation of Macon Detornay (2005), which is taught at more than eighty schools and was adapted into a prize-winning stage play in 2008.

Mansbach also writes in several other literary genres. His debut thriller, The Dead Run was published by HarperCollins in 2013, and the sequel, The Devil's Bag Man, in 2015. The first book in a middle grades series co-written with Alan Zweibel and entitled Benjamin Franklin: Huge Pain in my Ass, was published in September 2015 by Hyperion. Jake the Fake Keeps It Real, the first title in a middle grades series co-written with Craig Robinson, is forthcoming from Crown in 2017. He is also the author, with Zwiebel and Dave Barry, of For This We Left Eygpt?, a parody Haggadah, forthcoming from Flatiron Books in time for your 2017 Seder.

Mansbach lives in Berkeley, California, and is a frequent lecturer on college campuses.

Fuck, Now There Are Two of You (Go the Fuck to Sleep #3) (Hardcover)

Go the Fuck to Sleep (Hardcover)

A Field Guide to the Jewish People: Who They Are, Where They Come From, What to Feed Them…and Much More. Maybe Too Much More (Hardcover)