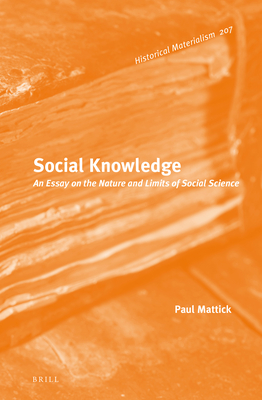 This is book number 207 in the Historical Materialism Book series.

Looking at Marx as an anthropological theorist, Mattick compares his critique of political economy with Evans-Pritchard's analysis of Azande witchcraft. Just as the British anthropologist attempted to explain Azande ideas and rituals in terms of their place in native life, Marx wished to explain the continued faith in economics - despite its striking weakness as a science - in terms of the central role played by this system of ideas in the daily lives of natives of capitalist society. This comparison leads to the questions about the nature of scientific thinking and its relation to our everyday knowledge of social reality that are the subject of this book.

Paul Mattick received a Ph.D. in Philosophy in 1981 at Harvard University; he taught philosophy at several institutions; and is currently Politics (Field Notes) Editor at the Brooklyn Rail. He edited the International Journal of Political Economy from 1987 to 2007 and is the author, most recently, of Business as Usual (Reaktion, 2011) and Theory and Critique. Essays on Capital (Brill, 2018).