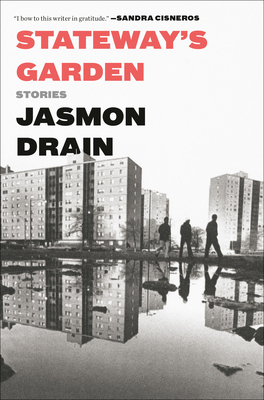 “The residents and their buoyant dreams are documented, celebrated, honored. I bow to this writer in gratitude.”—Sandra Cisneros

Before being torn down in 2007, the Stateway Gardens public housing projects on Chicago’s South Side were ridden with deprivation and crime. But for some, like Tracy, the shy, intelligent young boy at the center of this enthralling collection of linked stories, they are simply home. Set in the mid-1980s and taking readers up to the point of the destruction of the infamous Cabrini-Green housing projects—a set of buildings similar in design to Stateway Gardens to the south—this collection gives an intimate look at the hopes, dreams, failures, and fortunes of a group of people growing up with the deck always stacked against them. Through Jasmon Drain’s sensitive and often playful prose, we see another side of what we have come to know as “the projects.”

Stateway’s Garden is a coming-of-age story told in short stories, through the lens of a childhood made rough by the crush of poverty and violence, with the crack epidemic a looming specter ahead. And yet, through the experiences and ambitions of Tracy and other young characters, Drain reveals a vibrant community that creates its own ecosystem, all set in a series of massive, seemingly soulless concrete buildings. Not shying away from the darkness of life for his characters, Drain shows the full complexity of their human experiences.

Exquisitely detailed and novelistic in scope, this collection of stories will linger in your mind long after you have turned the final page.

“The only fireworks in Jasmon Drain’s subtly rendered, beautiful debut are the ones his young characters watch explode in the distance from the public housing project they live in. These are patient, profoundly compassionate stories about the small shocks and flickers of transcendence in ordinary Chicagoans’ lives. Told in hauntingly spare prose reminiscent of Raymond Carver’s, Drain’s stories take a moment to sink in. Once they do, they don’t leave you.”—Sam Graham-Felsen, author of Green

“These interconnected stories bring us close to an area rarely represented in our literature and art: the project housing of Chicago. It captures the pain, cruelty, and moments of magic that can only come from living in poverty in America. Jasmon Drain’s fierce eye projects images and characters that will stay with you long after putting the book down. A devastating knockout of a debut.”—Fernando A. Flores, author of Tears of the Trufflepig

“About Chicago, Jasmon Drain knows a thing or two. He writes about a housing project so grim that those who move in dream of leaving. Stateway Gardens as a community is long gone, destroyed by gentrification. But the residents and their buoyant dreams are documented, celebrated, honored. I bow to this writer in gratitude.”—Sandra Cisneros

“Characters seek soft shelter in these powerfully felt, interconnected stories. . . . Capturing an intricate portrait of Stateway Gardens (a real place that was razed in 2007), Drain mines the idea that life in the projects could be both a thing to escape and something to nurture, a matter made more critical by the ticking clock of gentrification. . . . A deep, vibrant collection.”—Booklist

“[Jasmon] Drain writes with fierce warmth about characters coping with crushing racism and poverty in this impressive debut.”—Kirkus Reviews