A Mouthful of Air (Paperback) 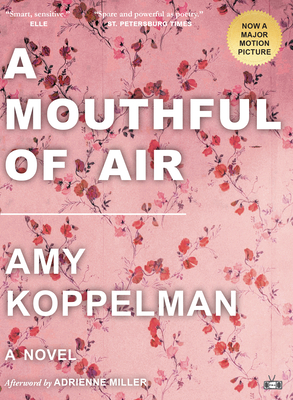 Now a major motion picture starring Amanda Seyfried and Finn Wittrock.
Compared to seminal feminist works such as Charlotte Perkins Gilman's "The Yellow Wallpaper" and Sylvia Plath's The Bell Jar, A Mouthful of Air is a powerful, tragic statement on motherhood, family, and survival.

A Mouthful of Air is a compassionate and wrenching portrait of Julie Davis, a young wife and mother torn between the love she feels for her family and the voice in her head that insists they'd be better off without her.

We meet Julie several weeks after her suicide attempt, on the eve of her son's first birthday. Grateful to be alive, Julie tries her best to appreciate every moment--"this tree, that passing car, the pretzel guy up ahead on the corner. She has, for whatever reason, been given a second chance"--but her emotional demons are unrelenting, and she is slowly and quietly losing the battle.

Within the narrative of A Mouthful of Air is an argument about the nature of depression--its causes, cures, and the price it exacts from its victims. With spare, elegant prose, this brutally honest portrayal of family and self illuminates the power and complexity of the human psyche.

Originally published in 2003, A Mouthful of Air now includes an afterword by author Adrienne Miller.