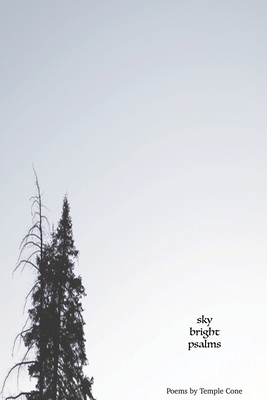 Temple Cone is Professor of English at the United States Naval Academy and the former Poet Laureate for the City of Annapolis. He is the author of four books of poetry: Guzzle; That Singing; The Broken Meadow, which received the 2010 Old Seventy Creek Poetry Press Series Prize; and No Loneliness, which received the 2009 FutureCycle Press Poetry Book Prize. He has also published seven poetry chapbooks, as well as critical reference works on Cormac McCarthy, Walt Whitman, and 20th-Century American Poetry. He holds a Ph.D. in Literature from the University of Wisconsin, an M.F.A. in Creative Writing from the University of Virginia, an M.A. in Creative Writing from Hollins University, and a B.A. in Philosophy from Washington and Lee University. He lives in Maryland with his family.

The poems of Temple Cone are firmly rooted in the ancient dictum of Heraclitus: the way up and the way down are one. Here are poems that demonstrate, again and again, that the only way to reach the other world, the world of visions and ecstasies, is to go further into the brilliant muck and mire of this one. Here are poems 'with a sacred hunger to scorch / acres of gold into brass burn / just for the savage wonder of it.' Here, in convincing lines, is a psalm.

author of The Dark Heart of Every Wild Thing

With an assured and nimble grip on language, Temple Cone's luminous Sky Bright Psalms is by turns tender and tough, humorous and grave, spiritual and earthy. It takes us from ancient Greece in "Burning Sappho" to the dialect of rural America in "Covenant," from "This tenth Muse, / whose limbs loosened / at a touch" to "like grit under sharecroppers' nails, / even them rickety deer, do so need song." In "Pomegranate," Cone observes how the fruit's seeds "offer a teardrop's worth / of sweetness" and follows with "You have to peel away / a bit of flesh." We sense the depth of felt life when in "Paradiso" we come to "But now, look how the butcher weeps / after calling the lamb to him, / after slitting its throat." We smile when Cone writes of lovers in "Orchard" "so when he slipped her the tongue / she slipped him the grammar." After reading these poems one feels that, like Sappho, Temple Cone has 'plucked our] hearts / easily as lyre strings."

author of The Green Cup