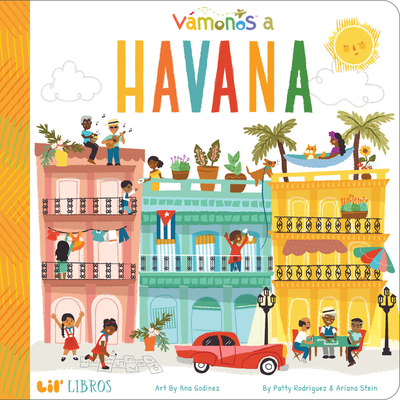 By Patty Rodriguez, Ariana Stein, Ana Godinez (Illustrator)
$9.99
Not in Stock... Available to ship in 3-5 days​

Teach your baby about Havana, the capital of Cuba, through illustrations and words that will teach them about the world in English and Spanish.

Let's take a trip around the world with V MONOS. In this colorful new series by Lil' Libros, each book celebrates the sights, sounds, and people of a different city both in English and Spanish.

Through adventurous illustrations, make a quick trip to Havana on the island of Cuba to play a little game of dominos with the abuelitos. Discover with your children what makes each city fantastic and special.

With simple text by Patty Rodriguez and Ariana Stein, and colorful illustrations by Lil' Libros' very own Ana Godinez, each book will have your little ones celebrating the world, fostering empathy, and seeing that there are a million ways to live on this planet