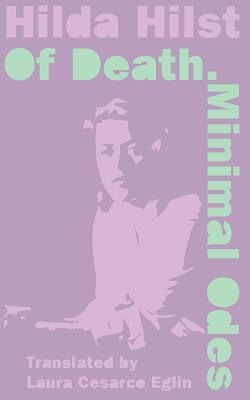 Poetry. Latinx Studies. Translated by Laura Cesarco Eglin. If life is no more than a prolonged flirtation with death, then Hilda Hilst's OF DEATH. MINIMAL ODES is the true account of a lifelong seduction. It is at once both a reverie and reliquary, as the poet imagines and reimagines that most paradoxical moment of disintegration--the corporeal flesh fusing with death's own dark corpus. With a visceral-mystical poetic voice that is as teasingly unrestrained as it is intellectually sublime, Hilst's odes enact a baroque danse macabre, where the poet revels in the incongruities of simultaneously seeking the sacred and profane. Translating the first collection of Hilda Hilst's significant body of poetry to appear in English, Laura Cescarco Eglin renders the imagery and philosophical complexity of these minimal odes with brio, while preserving the playful tone and lush melodies that mark OF DEATH. MINIMAL ODES as uniquely Hilstian. The spare but ornate poems in this collection are startling the way a menagerie of creatures can be startling when the creatures themselves are composed of animal bits: claw, fur, 'brain and hooves / in the pitch dark.' Each minimal ode addresses death who becomes at times a lover, a sister, a slow-moving and wild mammal ever arriving. Hilst builds 'passageways' for death with each line--corridors which are 'Intricate. In knots.' The reader cannot help but join the poet in calling out the various names for death: 'Amber / Bundle of flutes / Gutter / Light.' And these are rendered stunningly in English by Laura Cesarco Eglin, who carries over every verse with clarity and care as though she were holding up pieces of glass to sunlight.--Carolina Ebeid Before gaining notoriety for her highly original, experimental, and provocative works of fiction, Hilda Hilst engraved her name in Brazilian literary circles as a poet. OF DEATH. MINIMAL ODES, newly and assuredly translated by Laura Cesarco Eglin, shows Hilst the poet at her distilled best. As much a multimedia conversation with poetry as with life, death, and herself, Hilst poses essential questions whose answers lie at the core of these poems.--John Keene In OF DEATH. MINIMAL ODES by Brazilian writer Hilda Hilst, death and poetry are lifelong bedfellows. In fact, they engage in a natural partnership, or, to borrow from the poet herself, a sisterhood-in-dialogue that is at once serious and seductive, playful, perilous, and habitual. Hilst's creative wordplays and tonal spectrum, by contrast, are extraordinary, and Laura Cesarco Eglin's translation matches her inventiveness with equal illumination. Hilst's verses affirm the common ground that exists between life and death, and carry with them a vibrant, volatile charge that accompanies this complicit union.--Marguerite Itamar Harrison, Associate Professor of Portuguese and Brazilian Studies, Smith College The poetry of Hilda Hilst is fundamental--in every sense. Thanks to Laura Cesarco Eglin, who has accepted the challenge of translating these verses brimming with sensuality and music, a little more of Hilst's work is made known to the world. I welcome this partnership.--Adriana Lisboa.