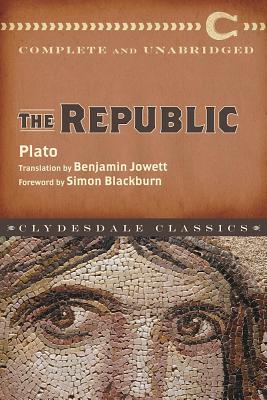 By Plato, Simon Blackburn (Foreword by), Benjamin Jowett (Translated by)
$5.50

Packaged in handsome, affordable trade editions, Clydesdale Classics is a new series of essential works. From the musings of intellectuals such as Thomas Paine in Common Sense to the striking personal narrative of Harriet Jacobs in Incidents in the Life of a Slave Girl, this new series is a comprehensive collection of our intellectual history through the words of the exceptional few.

Originating in approximately 380 BC, Republic is a Socratic dialogue written by famed Greek philosopher Plato. Often referred to as Plato’s masterwork, Republic’s central goal is to define the ideal state. By conceptualizing this model state, Greeks believed it would lead states formed with its principles in mind to function the most efficiently and fairly, striving toward justice and the greater good of society.

This edition includes a foreword by British American philosopher and Plato expert Simon Blackburn. Widely read around the world by philosophy students and academics alike, Plato’s Republic is sure to pass on its invaluable lessons and enlighten the next generation of thinkers.

Plato was the most famous of the Greek philosophers, aside from his teacher Socrates. He founded the Academy in Athens, written dialogue, political philosophy, epistemology, the concept of religion, and many other crucial elements of thought. All were attributed to Plato, which laid the framework for Western philosophy as we know it. He was also credited for famed protégé Aristotle, whose contributions to philosophy and thought are often deemed of equal or greater importance.

Simon Blackburn is a British American philosopher. He has been a professor at University of Cambridge and currently teaches at University of North Carolina at Chapel Hill. He is a former editor of the journal The Mind and is the author of Plato’s Republic: A Biography.