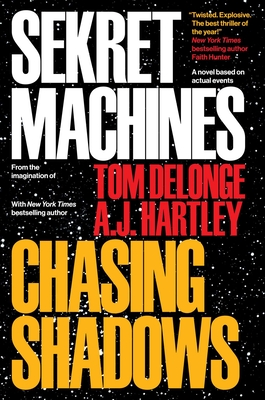 This is book number 1 in the Sekret Machines series.

"Blurring the line of science fiction and fact, Sekret Machines is an explosive thriller that will make you question everything you've been told about what's really out there."  -Larry King

For those who know…

that something is going on…

The witnesses are legion, scattered across the world and dotted through history, people who looked up and saw something impossible lighting up the night sky. What those objects were, where they came from, and who—or what—might be inside them is the subject of fierce debate and equally fierce mockery, so that most who glimpsed them came to wish they hadn’t.

Most, but not everyone.

Among those who know what they’ve seen, and—like the toll of a bell that can’t be unrung—are forever changed by it, are a pilot, an heiress, a journalist, and a prisoner of war.  From the waning days of the 20th century’s final great war to the fraught fields of Afghanistan to the otherworldly secrets hidden amid Nevada’s dusty neverlands—the truth that is out there will propel each of them into a labyrinth of otherworldly technology and the competing aims of those who might seek to prevent—or harness—these beings of unfathomable power.  Because, as it turns out, we are not the only ones who can invent and build…and destroy.

Featuring actual events and other truths drawn from sources within the military and intelligence community, Tom DeLonge and A.J. Hartley offer a tale at once terrifying, fantastical, and perhaps all too real. Though it is, of course, a work of…  fiction?

A.J. Hartley is the New York Times and USA Today bestselling author of books in a variety of genres and was born and raised in Lancashire in Northern England,. A.J.’s stories are driven by mystery and danger but also reflect his abiding interest in archaeology, history, and foreign travel. As an English major at Manchester University he took extra classes in Egyptology and got a job working on a Bronze Age site just outside Jerusalem. Since then, life has taken him to many places around the world, and though he always leaned more towards the literary than to the strictly historical, his fascination with the past continues unabated. He has an M.A. and Ph.D. in English literature from Boston University, and he is the Russell Robinson Professor of Shakespeare Studies at the University of North Carolina, Charlotte, and works as a scholar, screenwriter, dramaturg and theatre director.

Jim retired in 2007 after a 25-year career in the Central Intelligence Agency’s National Clandestine Service. At the time of his retirement he was a member of the CIA’s Senior Intelligence Service. Jim served multiple overseas and domestic tours along with senior management positions in CIA headquarters. He is the recipient of the Agency's Career Intelligence Medal.

Peter Levenda is a native of the Bronx, New York but has lived or traveled all over the United States and the world in the course of his life, work and research. As an executive with an American telecommunications manufacturer he was based in Kuala Lumpur, Malaysia for more than seven years. Before that he was one of the first Americans to do business (successfully) in China. He has an MA in Religious Studies and Asian Studies from FIU, and speaks a variety of languages (some of them dead). He was briefly detained at the notorious Nazi sanctuary and interrogation center Colonia Dignidad in Chile, in 1979 during the course of research for Unholy Alliance. He has appeared in numerous television programs for the History Channel, the Discovery Channel, National Geographic, and TNT as an expert on Nazi Germany and especially on the extreme religious and esoteric ideas that formed the Nazi worldview. He has interviewed Nazis, neo-Nazis, Klansmen, occultists, CIA officers, and Islamic terrorists in the course of his research and has visited Chinese prisons and military bases; Buddhist temples; Muslim boarding schools in Indonesia; Russian Orthodox monasteries; mosques in Europe, the United States and Asia; the Palestine Liberation Organization; several voodoo hounforts; the former KGB headquarters (Dzherzinsky Square) in Moscow; has been held at gunpoint in Latin America, and celebrated with a state dinner in Beijing. At the age of seventeen he gate-crashed the funeral for assassinated Senator Robert F. Kennedy at St. Patrick's Cathedral in New York City, and led the procession out of the cathedral. (He graduated high school later that month.) He was a member of the same front organization -- a renegade Ukrainian church in the Bronx -- that provided cover for David Ferrie and Jack Martin (suspected co-conspirators in the JFK assassination). In addition, he was an auxiliary police officer for the New York Police Department. His published work has been praised by Norman Mailer, Jim Hougan, Dick Russell, Whitley Strieber, Katherine Neville, and many others. He is or was a member of MENSA, of the American Academy of Religion, of the Association of Former Intelligence Officers, of the Norman Mailer Society, and the T. E. Lawrence Society.

"Blurring the line of science fiction and fact, Sekret Machines is an explosive thriller that will make you question everything you've been told about what's really out there."   -Larry King