Beyond the Green Zone: Dispatches from an Unembedded Journalist in Occupied Iraq (Paperback) 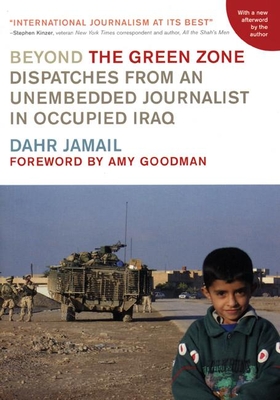 "International journalism at its best."--Stephen Kinzer

"Every conflict spawns a handful of journalists who are willing to not only brave the war zone but to seek out the stories ignored by the press pack. The Iraq War has brought us Dahr Jamail. . . . I suspect Jamail's account will prove an enduring document of what really happened during the chaotic years of occupation, and how it transformed ordinary Iraqis. . . . It tells everything."--Mother Jones

"From the earliest days of the war, Dahr Jamail has been a human conduit for the voices of Iraqis living under U.S. occupation. In the face of tremendous personal risk, his commitment to the crucial, principled task of bearing witness has never wavered, and this extraordinary book is the result."--Naomi Klein

Named by AlterNet as one of the top three progressive books of 2007 alongside Naomi Klein's The Shock Doctrine and Jeremy Scahill's Blackwater, Dahr Jamail's Beyond the Green Zone goes past the polished desks of the corporate media and Washington politicians to tell first hand of the reality of life in Iraq.

Dahr Jamail is an independent journalist who has covered the Middle East for more than four years. Jamail writes for the Inter Press Service and many other outlets and is a regular guest on Democracy Now . He lives in California.

Amy Goodman is a best-selling author and the host of Democracy Now .

Dahr Jamail's reporting from Iraq has been published in newspapers and magazine worldwide. He has appeared on Democracy Now! as a regular guest, as well as BBC, Pacifia Radio, and numerous other networks. Amy Goodman has been confronting the Washington establishment and its corporate sponsors while giving voice to the ordinary citizens and activists who are fighting for a better, more peaceful world. Her daily international radio and TV show, Democracy Now!, began in 1996 and is now carried on more than 500 stations and on http: //www.democracynow.org.