Beyond the Green Zone: Dispatches from an Unembedded Journalist in Occupied Iraq (Hardcover) 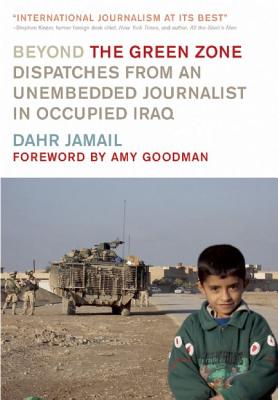 By Dahr Jamail, Amy Goodman (Foreword by)
Email or call for price.
Out of Print - Not Available

"Dahr Jamail does us a great service, by taking us past the lies of our political leaders, past the cowardice of the mainstream press, into the streets, the homes, the lives of Iraqis living under US occupation. If what he has seen could be conveyed to all Americans, this ugly war in Iraq would quickly come to an end. A superb journalist."--Howard Zinn

"We walk slowly under the scorching sun along dusty rows of humble headstones. She continues reading them aloud to me, "Old man wearing jacket with dishdasha, near industrial center. He has a key in his hand." Many of the bodies were buried before they could be identified. Tears welling up in my eyes she quietly reads, "Man wearing red track suit." She points to another row, "Three women killed in car leaving city by American missile.""

As the occupation of Iraq unravels, the demand for independent reporting is growing. Since 2003, unembedded journalist Dahr Jamail has filed indispensable reports from Iraq that have made him this generation's chronicler of the unfolding disaster there. In these collected dispatches, Jamail presents never-before-published details of the siege of Fallujah and examines the origins of the Iraqi insurgency.

Dahr Jamail makes frequent visits to Iraq and has published his accounts in newspapers and magazines worldwide. He has regularly appeared on "Democracy Now ," as well as the BBC, Pacifica Radio, and numerous other networks.

Dahr Jamail's reporting from Iraq has been published in newspapers and magazine worldwide. He has appeared on Democracy Now! as a regular guest, as well as BBC, Pacifia Radio, and numerous other networks. Amy Goodman has been confronting the Washington establishment and its corporate sponsors while giving voice to the ordinary citizens and activists who are fighting for a better, more peaceful world. Her daily international radio and TV show, Democracy Now!, began in 1996 and is now carried on more than 500 stations and on http: //www.democracynow.org.