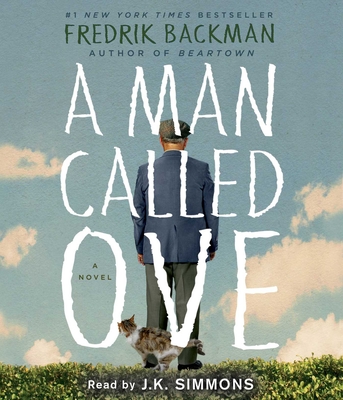 Mix of Old Man from Up, the tone of Stranger Than Fiction, and a truly compelling story of a man learning that a new life can come despite how hard one tries to run away from it. Hilarious. Smart. Awesome.

“A Man Called Ove by Swedish blogger and columnist Backman is one of those books you read and then want everyone else to read, too. It is also one of those books where you don't dare go into detail about the main character, the setting, or the plot because that would ruin the experience for others. Suffice it to say that the man whose name is Ove is a curmudgeon. He's grumpy. He's cantankerous. And he is a delight! Long may he harrumph!”
— Rene Kirkpatrick, Eagle Harbor Book Company, Bainbridge Island, WA

Meet Ove. He’s a curmudgeon—the kind of man who points at people he dislikes as if they were burglars caught outside his bedroom window. He has staunch principles, strict routines, and a short fuse. People call him “the bitter neighbor from hell.”

But must Ove be bitter just because he doesn’t walk around with a smile plastered to his face all the time? Behind the cranky exterior there is a story and a sadness. So when one November morning a chatty young couple with two chatty young daughters move in next door and accidentally flatten Ove’s mailbox, it is the lead-in to a comical and heartwarming tale of unkempt cats, unexpected friendship, and the ancient art of backing up a U-Haul. All of which will change one cranky old man and a local residents’ association to their very foundations.

Fredrik Backman’s novel about the angry old man next door is a thoughtful exploration of the profound impact one life has on countless others. “If there was an award for ‘Most Charming Book of the Year,’ this first novel by a Swedish blogger-turned-overnight-sensation would win hands down” (Booklist, starred review).

Fredrik Backman is the #1 New York Times bestselling author of A Man Called Ove, My Grandmother Asked Me to Tell You She’s Sorry, Britt-Marie Was Here, Beartown, Us Against You, and Anxious People, as well as two novellas and one work of nonfiction. His books are published in more than forty countries. He lives in Stockholm, Sweden, with his wife and two children. Connect with him on Facebook and Twitter @BackmanLand and on Instagram @Backmansk.