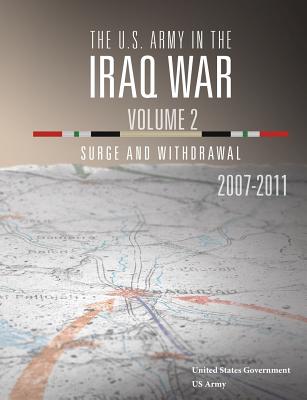 By United States Government Us Army
$24.99
Email or call for price.

The Iraq War has been the costliest U.S. conflict since the Vietnam War. To date, few official studies have been conducted to review what happened, why it happened, and what lessons should be drawn. This publication, The U.S. Army in the Iraq War Volume 2: Surge and Withdrawal 2007 - 2011, is the Army's initial operational level analysis of this conflict, written in narrative format, with assessments and lessons embedded throughout the work. This study reviews the conflict from a Landpower perspective and includes the contributions of coalition allies, the U.S. Marine Corps, and special operations forces. Presented principally from the point of view of the commanders in Baghdad, the narrative examines the interaction of the operational and strategic levels, as well as the creation of theater level strategy and its implementation at the tactical level. Volume 1 begins in the truce tent at Safwan Airfield in southern Iraq at the end of Operation DESERT STORM and briefly examines actions by U.S. and Iraqi forces during the interwar years. The narrative continues by examining the road to war, the initially successful invasion, and the rise of Iraqi insurgent groups before exploring the country's slide toward civil war. This volume concludes with a review of the decision by the George W. Bush administration to "surge" additional forces to Iraq, placing the conduct of the "surge" and its aftermath in the second volume.This study was constructed over a span of 4 years and relied on nearly 30,000 pages of hand-picked declassified documents, hundreds of hours of original interviews, and thousands of hours of previously unavailable interviews. Original interviews conducted by the team included President George W. Bush, Secretary of State Condoleezza Rice, Secretaries of Defense Leon Panetta and Robert Gates, Chairmen of the Joint Chiefs of Staff, and every theater commander for the war, among many others. With its release, this publication, The U.S. Army in the Iraq War, represents the U.S. Government's longest and most detailed study of the Iraq conflict thus far.