For a Ruthless Critique of All That Exists: Literature in an Age of Capitalist Realism (Paperback) 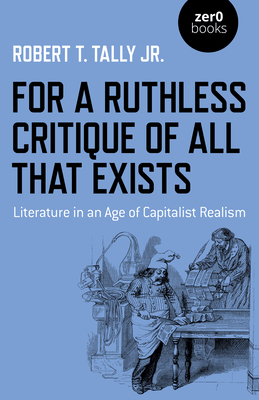 For a Ruthless Critique of All that Exists takes as its point of departure two profound and interrelated phenomena. The first is the pervasive sense of what Mark Fisher had called "capitalist realism, in which (to cite the famous expression variously attributed to Fredric Jameson and Slavoj Zizek) it is easier to imagine the end of the world than then end of capitalism. As Jameson in particular has noted, "perhaps this is due to some weakness in our imaginations," and the attenuation of the imaginative function in cultural criticism has far-reaching implications for the organization and reformation of institutions more generally. This manifests itself as a waning of speculative or theoretical energy, which in turn leads to a general capitulation to the tyranny of "what is," the actually existing state of affairs, and the preemptive disavowal of alternative possibilities. Connected to this is the second phenomenon: the prevalent tendency in literary and cultural criticism over the past 30 or more years to eschew critical theory and even critique itself, while championing approaches to cultural study that emphasize surface reading, thin description, ordinary language philosophy, object-oriented ontology, and post-critique. Together these forms of anticritical and antitheoretical criticism have constituted a tendency that has in its various incarnations come to dominate the humanities and other areas of higher education in recent years. The latter has served to reinforce the former, and the result has been to align literary and cultural criticism with the broad-based forces of neoliberalism whose influence has so deleteriously transformed not only higher education but the whole of society at large. Robert T. Tally Jr. argues that, in order to counter these trends and empower the imagination, the time is ripe for "a ruthless critique of all that exists," to borrow a phrase from the young Marx. This book is intended as a provocation, at once a polemic and a call to action for cultural critics.

Robert T. Tally Jr. lives in San Marcos, Texas, and is a Professor of English at Texas State University.