Futurability: The Age of Impotence and the Horizon of Possibility (Paperback) 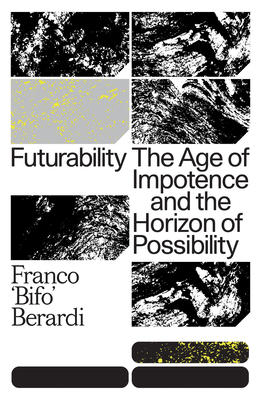 A comprehensive philosophy of contemporary life and politics, by one of the sharpest critics of the present

We live in an age of impotence. Stuck between global war and global finance, between identity and capital, we seem incapable of producing the radical change that is so desperately needed. Meanwhile the struggle for dominance over the world is a battlefield with only two protagonists: the forces of neoliberalism on one side, and the new order led by the likes of Trump and Putin on the other. How can we imagine a new emancipatory vision, capable of challenging the deadlock of the present? Is there still a way to disentangle ourselves from a global order that shapes our politics as well as our imagination?

In this inspired work, renowned Italian theorist Franco Berardi tackles this question through a grounded yet visionary analysis of three concepts fundamental to his understanding of the present: possibility, potency, and power. Characterizing possibility as content, potency as energy, and power as form, Berardi suggests that the road to emancipation unspools from an awareness that the field of the possible is only limited, and not created, by the power structures behind it. Other futures and other worlds are always already inscribed within the present, despite power’s attempt to keep them invisible.

Overcoming the temptation to give in to despair or nostalgia, Berardi proposes the notion of “futurability” as a way to remind us that even within the darkness of our current crisis a better world lies dormant. In this volume, Berardi presents the most systematic account to date of his philosophy, making a crucial theoretical contribution to the present and future struggle

Franco “Bifo” Berardi was the founder of the pirate radio station Radio Alice in 1976. One of the most prominent members of the Italian movement Autonomia, Berardi worked closely with the French psychoanalyst Félix Guattari throughout the 1980s. Since the early 1990s, much of his theoretical work has focused on the relationship between psychopathology, information technology and capitalism.

His latest books in English are And: Phenomenology of the End, Heroes: Mass Murder and Suicide, and The Uprising: On Poetry and Finance.