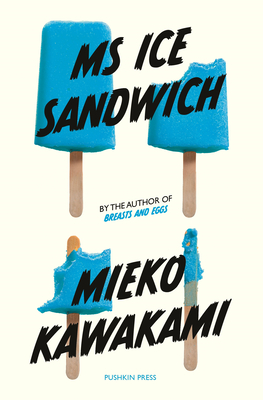 A quixotic and funny tale about first love - from the Akutagawa Prize-winning author.


A boy is obsessed with a woman who sells sandwiches. He goes to the supermarket almost every day, just so he can look at her face. She is beautiful to him, and he calls her "Ms Ice Sandwich", and endlessly draws her portrait.

But the boy's friend hears about this hesitant adoration, and suddenly everything changes. His visits to Ms Ice Sandwich stop, and with them the last hopes of his childhood.

A moving and surprisingly funny tale of growing up and learning how to lose, Ms Ice Sandwich is Mieko Kawakami at her very best.

Mieko Kawakami was born in Osaka in 1976. Her first break was as a singer, making her major-label debut in 2002 and going on to release three albums. Eventually she branched out into writing, first submitting poems to literary magazines and then winning the Akutagawa Prize in 2008. In 2010 she received the MEXT Award for New Artists and the Murasaki Shikibu Literary Prize for her first full-length novel Heaven. She is the author of the novel Breasts and Eggs.

Originally from Manchester, UK, Louise Heal Kawai has lived in Japan for about 25 years and been a translator of Japanese literature for the past 10. Her translations include the bestselling memoir Yakuza Moon by Shoko Tendo, the ground-breaking feminist Taeko Tomioka novel Building Waves, and A Quiet Place by the mystery writer Seicho Matsumoto. Ms Ice Sandwich is her second Mieko Kawakami translation.

One of John Freeman's 29 Writers to Watch

"Mieko Kawakami is a master of the novella. . . A moving and surprisingly funny tale of growing up and learning how to lose, it is no overstatement to assert that Ms Ice Sandwich is Mieko Kawakami at her very best. . . Very highly recommended." — Midwest Book Review

"A subtle and endearing novella with a sweet sense of humor. Kawakami touches on loss, societal perceptions, first loves and new beginnings through the eyes of a grade-school boy and his relationships with the women closest to him." --Sara S., Vroman’s Bookstores

"Easily digestible…a book that ultimately lives longer in the memory than the hour or so it takes to read." — Financial Times

"Among many other awards, Haruki Murakami listed Mieko Kawakami as his favorite young writer, so you're obviously going to want to snatch up Ms. Ice Sandwich, her first book translated into English. This is a lovely coming-of-age story about a boy who becomes obsessed with a woman who sells sandwiches." — Bustle

"In Louise Heal Kawai’s translation, the novella is a wonderful example of the power of narrative voice." — Japan Times

"Reading this quirky coming of age novella was one of the best hours I've spent in sometime." — The Word’s Shortlist (blog)