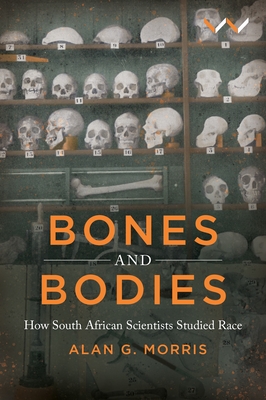 By Alan G. Morris
Email or call for price.

Alan G. Morris critically examines the history of evolutionary anthropology in South Africa, uncovering the often racist philosophical motivations of these physical anthropology researchers and the discipline itself

South Africa is famed for its contribution to the study of human evolution. In Bones and Bodies Alan G. Morris takes us back over the past century of anthropological discovery in South Africa and uncovers the stories of the individual scientists and how they contributed to our knowledge of the peoples of southern Africa, both ancient and modern. Not all of this history is one which we should feel comfortable with, as much of the earlier anthropological studies have been tainted with the tarred brush of race science. Morris critically examines the work of Raymond Dart, Thomas Dreyer, Matthew Drennan, and Robert Broom who all described their fossil discoveries with the mirror of racist interpretation, as well as the life and times in which they worked. Morris also considers how modern anthropology tried to rid itself of the stigma of these early racist accounts. In the 1960s and 1970s, Ronald Singer and Phillip Tobias introduced modern methods into the discipline that jettisoned much of what the public wished to believe about race and human evolution. Modern methods in physical anthropology rely on sophisticated mathematics and molecular genetics but are difficult to translate and sometimes fail to challenge preconceived assumptions. In an age where the authority of the expert and empirical science is questioned, this book shows the battle facing modern anthropology in how to explain science in a context that seems to be at odds with life experience. In this highly accessible insider account, Morris examines the philosophical motivations of these researchers and the discipline itself. Much of the material draws on old correspondence and interviews as well as from published resources.