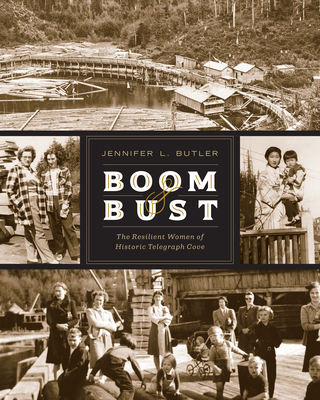 Telegraph Cove, one of Vancouver Island's most visited tourist destinations, has humble origins as a one-shack telegraph station, established a century ago. The community grew, first with a salmon saltery and sawmill, then with new industries developed by the ingenuity of the Cove's inhabitants. From the 1920s, Irish, Chinese, Japanese, German, Danish, Italian, and English community members, along with other old and new Canadians, were neighbours in a place accessible only by boat.

In this book, more than 25 women tell their own stories and memories of life in the Cove. They faced down the impacts of isolation, hazardous terrain, war, occupation, immigration, internment, social change, economic development, community decline, and environmental degradation--remarkable, given that Telegraph Cove's population peaked at 60. From these lives come stories of resilience, resourcefulness, heartbreak, humour, and triumph. Boom and Bust draws the reader in for an intimate view, accompanied by never-before-published archival photographs.