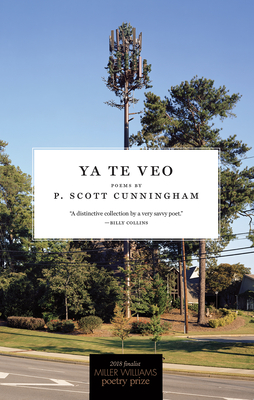 Ya Te Veo takes as its title the name of a mythical tree that eats people. Like the branches of that tree, the poems in this book seem to capture and nourish themselves on a diverse cast of would-be passers-by, drawing their life-force from the resulting synthesis of characters. Among the seized are poets and painters alongside musicians from Garth Brooks to Wu-Tang Clan to the composer Morton Feldman, whose mysterious personality serves as a backdrop in many poems for meditations on intimacy, ethics, and anxiety.

As the phrase “ya te veo” (“I see you”) implies, this is a book interested in revealing what we think is hidden, in questioning the gap inside all of us, a gap between what we feel and what we say and do, making space for our many contradictions.

Like the works of Feldman, these poems focus and recede, experimenting with form in order to accomplish a state of deep concentration. They impersonate sonnets, ghazals, terza rima, monologues, translations, and freestyles, but inexactly, embracing failed imitation as an opportunity to remix the familiar.

P. Scott Cunningham’s poems, essays, and translations have appeared in Harvard Review, The Awl, POETRY, A Public Space, RHINO, Los Angeles Review of Books, Tupelo Quarterly, Monocle, and The Guardian. He lives in Miami, Florida, where he serves as the director of O, Miami and the editor of Jai-Alai Books.

“. . . offers many delights including a wiggy explanation of how the New York School was formed and an updated, parodic version of ‘Dover Beach’ that comes out of the box with ‘The sea is a bomb tonight.’ Also notable is a poem about a victim of the Salem witch trials, Giles Corey, who was put to death by a now mercifully shelved method called ‘pressing,’ in which the victim lies under a board, which is then loaded with heavier and heavier stones until a confession or death is achieved. ‘More weight,’ Corey memorably demands from his executioners. And don’t miss ‘Poems about Concentration for People Who Can’t Concentrate,’ perhaps a distant cousin of Geoff Dyer’s essay collection Yoga for People Who Can’t Be Bothered to Do It. . . . In sum, a distinctive collection by a very savvy poet.”
—Billy Collins

“Jocular, erudite, inventive, brash, lyrical, edgy, smart, smart, smart—I’m running out of adjectives and I still haven’t captured the essence of this wonderful first book. ‘Like Rambo crossing the Delaware,’ Ya Te Veo reimagines characters and voices, poems and songs, ideas and aesthetics, creating a trans-cultural remix that may not be kinder and gentler, but is unquestionably wiser and funnier than the original. Part Lorca, part Rauschenberg, and a little bit ‘Florida Man,’ Scott Cunningham stakes his claim to a poetic identity we will be hearing from for a long time to come.”
—Campbell McGrath, author of XX

“What a virtuosic, surprising, and deeply moving book this is. In Ya Te Veo, Cunningham ‘sees’ the contemporary moment by making an exquisitely dissonant yet clear-eyed symphony of the personal and public past. Yes, these are poems of music and owls and giant human-eating plants. But to me, really, these are poems about power, economics, and how the sheer act of making something . . . anything . . . can be and might have to be enough. The knowledge that fills me by the end of this book is that sadness will continue endlessly but maybe I can make something spectacular rise out of it. This book is the best kind of economy. It doesn’t lie to me. It also helps me imagine my greatest possibilities. It is terrifying and filled with compassion.”
—Gabrielle Calvocoressi, author of Rocket Fantastic

“P. Scott Cunningham’s eclectic and perfectly crafted debut Ya Te Veo is a funhouse of carnivorous plants, fickle blizzards, and a litany of humans lost in their own humanness from Morton Feldman to Robert Mitchum to Tammy Wynette. Cunningham turns these figures and their ecosystems of need into something wholly unexpected and wonderful—poems that are often funny, often clear-eyed, and always knit tight. As the speaker of the title poem tells us, ‘to be beautiful means to be / unjustifiably trusted,’ but we can trust these poems and their empathetic wisdoms regardless of their nonstop and particular beauties.”
—Adrian Matejka, author of The Big Smoke