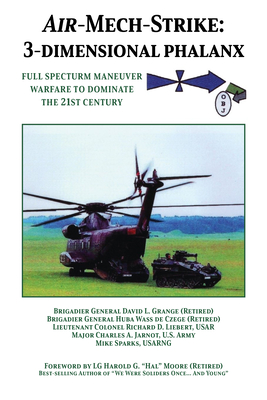 This book outlines how to reorganize the U.S. Army into a fully 2 and 3-Dimensional maneuver capable, ground force with terrain-agile, armored fighting vehicles sized to rapidly deploy by fixed-wing and rotary-wing aircraft to the scene of world conflicts and strike at the heart of freedom's enemies. The plan to build the Army into Air-Mech-Strike Forces, exploiting emerging information-age technologies, as well as America's supremacy in aircraft and helicopter delivery systems---at the lowest cost to the taxpayers, is described in detail. These Army warfighting organizations, using existing and some newly purchased equipment, will shape the battlefield to America's advantage, preserving the peace before it is lost; if not, then winning fights that must be fought quickly. The dangerous world we live in moves by the speed of the AIR, and the 21st Century U.S. Army 2D/3D combat team will dominate this medium by Air-Mech-Strike.