Toward an Anti-Capitalist Composition (Paperback) 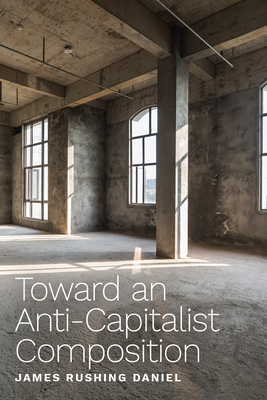 By James Rushing Daniel
Email or call for price.

In Toward an Anti-Capitalist Composition, James Rushing Daniel argues that capitalism is eminently responsible for the entangled catastrophes of the twenty-first century—precarity, economic and racial inequality, the decline of democratic culture, and climate change—and that it must accordingly become a central focus in the teaching of writing. Delving into pedagogy, research, and institutional work, he calls for an ambitious reimagining of composition as a discipline opposed to capitalism’s excesses.

Drawing on an array of philosophers, political theorists, and activists, Daniel outlines an anti-capitalist approach informed by the common, a concept theorized by Pierre Dardot and Christian Laval as a solidaristic response to capitalism rooted in inventive political action. Rather than relying upon claims of membership or ownership, the common supports radical, collective acts of remaking that comprehensively reject capitalist logics. Applying this approach to collaborative writing, student debt, working culture, and digital writing, Daniel demonstrates how the writing classroom may be oriented toward capitalist harms and prepare students to critique and resist them. He likewise employs the common to theorize how anti-capitalist interventions beyond the classroom could challenge institutional privatization and oppose the adjunctification of the professoriate.

Arguing that composition scholars have long neglected marketization and corporate power, Toward an Anti-Capitalist Composition extends a case for adopting a resolute anti-capitalist stance in the field and for remaking the university as a site of common work.

James Rushing Daniel is associate teaching professor at the University of Washington–Seattle. His research has been published in College English, Philosophy and Rhetoric, College Composition and Communication, and other venues. He is coeditor of Writing across Difference and author of Toward an Anti-Capitalist Composition.

“Among the important contributions that this monograph makes is that it recognizes the problems we have with historically entrenched racism and patriarchy, while also prodding literacy educators and scholars in higher education toward a more materialist, expansive, and economically aware view of engagement.”
—Tony Scott, Syracuse University

“Toward an Anti-Capitalist Composition is a plea to put the critique of capitalism at the center of composition theory and pedagogy. James Daniel offers a measured intervention while reminding us that composition is a place where working conditions are at their most precarious and exploitative. With political economy always in mind, Daniel makes a powerful case for composition as a site of critique, craft, and solidarity in the contemporary university.”
—Catherine Liu, University of California, Irvine

"Toward an Anti-Capitalist Composition is an angry—yet hopeful—book that provides pedagogical approaches to writing instruction that engage unapologetically in the project of solidarity-building."
—Seth Kahn, West Chester University of Pennsylvania