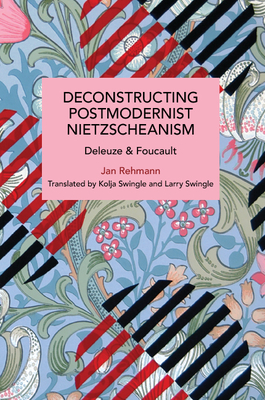 It is often asserted that postmodernism emerged from 'leftist' Nietzsche-interpretations, but this claim and its implications are rarely explored. Deconstructing Postmodernist Nietzscheanism investigates how Deleuze and Foucault read Nietzsche and apply a hermeneutics of innocence to his philosophy that erases the elitist, anti-democratic, and anti-socialist dimensions. In a clear and incisive analysis, Rehmann shows that this misreading also affects their own theory and impairs the ability to develop a radical critique from it. Thus the late Foucault's turn to self-care techniques merges a neo-Nietzschean approach with the ideologies of neoliberalism.

Rehmann's critique is not directed against the endeavor to take suggestions from some of Nietzsche's astute intuitions, but rather against the near universal tendency to use him as a symbolic capital without admitting his hierarchical obsession and other political flaws.

This book is an updated and extended version of Postmoderner Links-Nietzscheanismus: Deleuze and Foucault. Eine Dekonstruktion, originally published in German by Argument Verlag GmbH.

Jan Rehmann is co-editor of Das Argument and of the Historical-Critical Dictionary of Marxism (HKWM). He has published (among others), Theories of Ideology: The Powers of Alienation and Subjection.