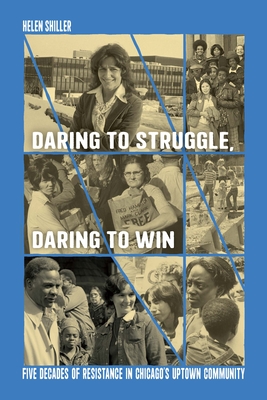 Helen Shiller went from radical anti-war activist in Wisconsin, to a member of a collective of white allies of the Black Panther Party in Chicago, to an elected city council person who helped break the back of the racialized opposition to Harold Washington, Chicago's first Black mayor. Shiller participated, when few others did, in the historic fight against the gentrification of a unique economically and racially mixed Chicago community on the Northside. With insight into historic community organizing and political battles in Chicago from the 1970s through 2010, this book details numerous policy fights and conflicts in Chicago during this time, illuminating recurrent political themes and battles that remain relevant to this day.

Daring to Struggle, Daring to Win is a compelling, insightful, must-read for all those struggling for a better world today.

Helen Shiller, raised by migrant Jewish parents, was radicalized by the anti-war and civil rights movements. Shiller was in a collective of whites aligned with the Black Panther Party on Chicago. Beginning in 1987, Shiller was a radical Chicago alderperson for 24 years.