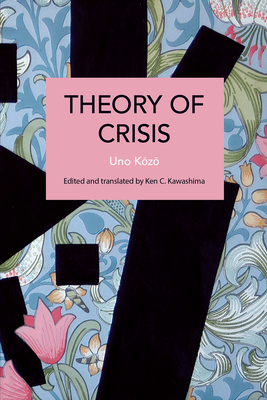 Kōzō Uno's Theory of Crisis presents an unparalleled and systematic demonstration of the inevitability of crisis under the capitalist mode of production. Based on a radical re-interpretation of Marx's Capital, Uno's theory of crisis emphasizes 'excess capital alongside surplus populations' and 'the commodification of labour power' at the heart of Marx's theory of crisis, and additionally provides a concise overview of capitalist crises from the stage of mercantilism to the imperialist stage of capitalism.

Included are two Appendix essays by Uno, which disentangle theoretical difficulties related to the theory of crisis in Marx's Capital, and two original and contemporary essays by scholars Makoto Itoh, Ken C. Kawashima and Gavin Walker. This book was originally published in Japanese as Kyōkō-ron by Iwanami Shoten, 1953.

Kōzō Uno (宇野 弘蔵, November 12, 1897 - February 22, 1977) is one of Japan's most important Marxist economists, known for his logical 'purification' of Marx's exposition in Capital, and his theory of the historical stages of capitalist development.Ken C. Kawashima is Associate Professor at the University of Toronto, and author of The Proletarian Gamble: Korean Workers in Interwar Japan (Duke, 2009), and co-editor of Tosaka Jun: A Critical Reader (Cornell, 2013).Gavin Walker is Associate Professor at McGill University, and author of The Sublime Perversion of Capital (Duke, 2016); editor of The End of Area (Duke, 2019 with Naoki Sakai) and The Red Years: Theory, Politics, Aesthetics in the Japanese '68 (Verso, forthcoming); editor and translator of Kojin Karatani's Marx: Towards the Centre of Possibility (Verso, 2020).