Toward a New World: Articles and Essays, 1901-1906: On the Psychology of Society; New World, and Contributions to Studies in the Realist Worldview (Historical Materialism) (Paperback) 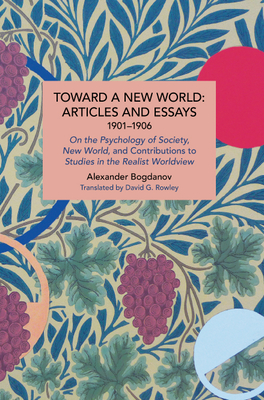 Alexander Bogdanov wrote the articles in this volume in the years before and during the Revolution of 1905 when he was co-leader, with V.I. Lenin, of the Bolshevik faction of the Russian Social-Democratic Labour Party, and was active in the revolution and the struggle against Marxist revisionism.

In these pieces, Bogdanov defends the principles of revolutionary Social-Democracy on the basis of a neutral monist philosophy (empiriomonism), the idea of the invariable regularity of nature, and the use of the principle of selection to explain social development. The articles in On the Psychology of Society (1904/06) discredit the neo-Kantian philosophy of Russia's Marxist revisionists, rebut their critique of historical materialism, and develop the idea that labour technology determines social consciousness. New World (1905) envisions how humankind will develop under socialism, and Bogdanov's contributions to Studies in the Realist Worldview (1904/05) defend the labour theory of value and criticise neo-Kantian sociology.

Alexander Bogdanov (1873-1928) was a leading member of the Bolshevik Party. A sometimes ally, and sometimes polemical target of Lenin, Bogdanov made enormous contributions to the theoretical and practical development of early Soviet society in a number of disparate areas.David G. Rowley is Emeritus Professor of History, University of Wisconsin-Platteville. He has published several articles on Alexander Bogdanov and is the translator of Bogdanov's Philosophy of Living Experience (Haymarket, 2017) and Empiriomonism (Haymarket, 2020).