The John Carlos Story: The Sports Moment That Changed the World (Hardcover) 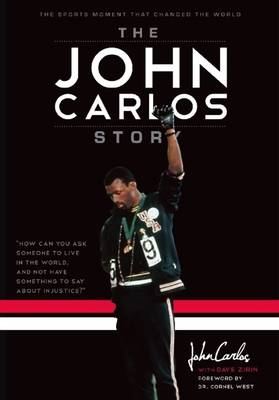 A powerful and poignant memoir.--Cornel West, from the foreword

John Carlos is an American hero. And finally he has written a memoir to tell us his story--and a powerful story it is. I couldn't put this book down.--Michael Moore

Seen around the world, John Carlos and Tommie Smith's Black Power salute on the 1968 Olympic podium sparked controversy and career fallout. Yet their show of defiance remains one of the most iconic images of Olympic history and the Black Power movement. Here is the remarkable story of one of the men behind the salute, lifelong activist John Carlos.

John Carlos is a former track and field athlete and professional football player, and a founding member of the Olympic Project for Human Rights. He won the bronze medal in the 200-meter race at the 1968 Olympics, where his Black Power salute on the podium with Tommie Smith caused much political controversy.

Dave Zirin is the author of four books, including Bad Sports: How Owners are Ruining the Games We Love, A Peoples' History of Sports in the United States, and What's My Name, Fool?

John Wesley Carlos: John Carlos is an African American former track and field athlete and professional football player. He was a founding member of the Olympic Project for Human Rights and won the bronze-medal in the 200 meters race at the 1968 Summer Olympics. His black power salute on the podium with Tommie Smith caused much political controversy. He went on to equal the world record in the 100 yard dash and beat the 200 meters world record. After his track career, he enjoyed brief stints in the National Football League and Canadian Football League but retired due to injury. He became involved with the United States Olympic Committee and helped to organize the 1984 Summer Olympics. He later became a track coach at a high school in Palm Springs, where he now resides. He was inducted into the USA Track & Field Hall of Fame in 2003. John Carlos Memoir is his first book. Dave Zirin is the author of four books, including Bad Sports, A Peoples' History of Sports in the United States, What's My Name Fool! and Welcome to the Terrordome. He writes the popular weekly column The Edge of Sports (edgeofsports.com) and is a regular contributor to SI.com, SLAM, The Los Angeles Times, and The Nation where he is the publications first Sports Editor. He lives in Washington, D.C..