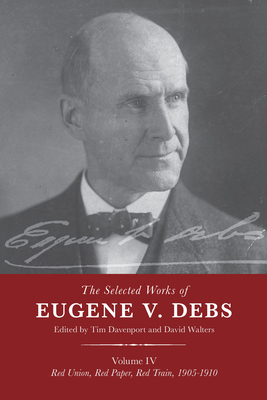 Volume 4: Red Union, Red Paper, Red Train, 1905-1910 gathers for the first time approximately 180 articles, speeches, letters, and interviews from the prime years of American socialist and labor leader Eugene V. Debs. These include materials relating to some of the great events for which the Indiana orator is best remembered: the founding of the Industrial Workers of the World (the red union), his move from freelance oratory to employment on the staff of the mass circulation Appeal to Reason (the red paper), and his coast-to-coast 1908 campaign for president of the United States aboard the legendary Socialist Red Special (the red train).

These were years of bitter struggle between concentrated capital and the fragmented and exploited labor movement. The period was marked by the illegal arrest and secretive extradition of Western Federation of Miners officials Charles H. Moyer and William D. Haywood in 1906 and the sensational legal proceedings which followed--activity which garnered Debs' full commitment for more than a year.

Tim Davenport, a resident of Corvallis, Oregon and a member of DSA, launched his Early American Marxism website (www.marxisthistory.org) in 2004 and has been a volunteer with Marxists Internet Archive for more than a decade. Writing as "Carrite," he has started more than 300 articles at Wikipedia and improved hundreds of others on topics relating to labor history and political biography. He is a member of the Organization of American Historians, Historians of American Communism, the Society for Historians of the Gilded Age and Progressive Era, and the Labor and Working-Class History Association. His previous book is The "American Exceptionalism" of Jay Lovestone and His Comrades [2015], co-edited with Paul LeBlanc and reissued as a Haymarket Books paperback in 2018. David Walters lives in Pacifica, California, and originally hails from New York City. Having been formally a member of several socialist organizations since High School in 1972, David was active in the labor movement and is now a retired member of IBEW 1245. He now dedicates himself toward the building of the Marxists Internet Archive which he helped found in the mid-1990s. Additionally he is the Director of the San Francisco based Holt Labor Library, a brick-and-mortar library for papers, documents and journals of the labor and revolutionary left.