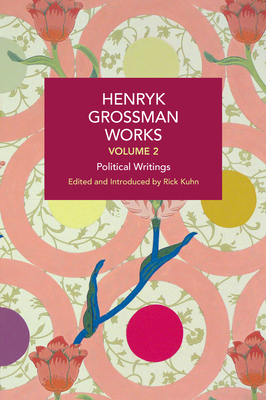 Henryk Grossman is best-known as a Marxist economist, but he also wrote valuable political interventions from his various positions within the workers' movement--first as a leader of the revolutionary organization of Jewish workers in the Polish province of Austria before the First World War, then as a member of the Communist Workers Party of Poland during the early 1920s, and later as a Marxist academic during the early 1930s. These writings deal with the political situation, tactics and strategy for the Jewish Social Democratic Party of Galicia, the initial reception of Marxism in Poland, and include substantial reflections on the left wing movements, organizations, and leading individuals of his time.

This is the second volume in a substantial multi-volume reference work collecting and translating all of Grossman's writings.

Henryk Grossman (1881-1950) was the preeminent Marxist economist of the twentieth century. He was the founding theoretician and secretary of the Jewish Social Democratic Party of Galicia, a Professor at the Free University of Warsaw, a member of the Institute for Social Research at the University of Frankfurt, and then, later, at the University of Leipzig.Rick Kuhn is a member of Socialist Alternative in Australia. He wrote the Deutscher Prize winning biography Henryk Grossman and the Recovery of Marxism (University of Illinois, 2008) and is an honorary associate professor at the Australian National University.