Throwing Stones at the Moon: Narratives from Colombians Displaced by Violence (Voice of Witness) (Paperback) 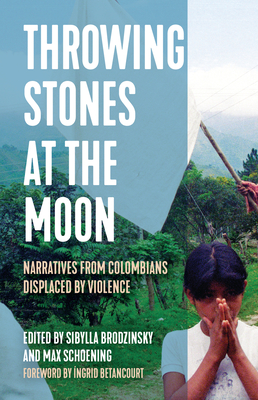 For nearly five decades, Colombia has been embroiled in internal armed conflict among guerrilla groups, paramilitary militias, and the country's own military. Civilians in Colombia have to make their lives despite the threat of torture, kidnapping, and large-scale massacres--and more than four million have had to flee their homes. The oral histories in Throwing Stones at the Moondescribe the most widespread of Colombia's human rights crises: forced displacement. Speakers recount life before displacement, the reasons for their flight, and their struggle to rebuild their lives. Among the narrators:

JULIA, a hospital union leader whose fight against corruption led to a brutal attempt on her life. In 2009, assassins tracked her to her home and stabbed her seven times in the face and chest. Since the attack, Julia has undergone eight facial reconstructive surgeries, and continues to live in hiding.

DANNY, who at eighteen joined a right-wing paramilitary's enormous training camp in the Eastern Plains of Colombia. Initially lured by the promise of quick money, Danny soon realized his mistake and escaped to Ecuador. He describes his harrowing escape and his struggle to survive as a refugee with two young children to support.

Sibylla Brodzinsky is a freelance journalist who has spent more than twenty years writing about Latin American politics, human rights, and social issues. She is based in Colombia and contributes regularly to the Economist, the Christian Science Monitor, and the Guardian. Max Schoening is the Colombia researcher for Human Rights Watch. He has written extensively about human rights issues in Colombia, including forced displacement, transitional justice, and abuses against Afro-Colombians. Ingrid Betancourt is a Colombian politician, former senator and anti-corruption activist. Betancourt was kidnapped by the Revolutionary Armed Forces of Colombia (FARC) in 2002 and was rescued by Colombian security forces six and a half years later in 2008. She has since continued her activism work and has written a memoir about her experience.