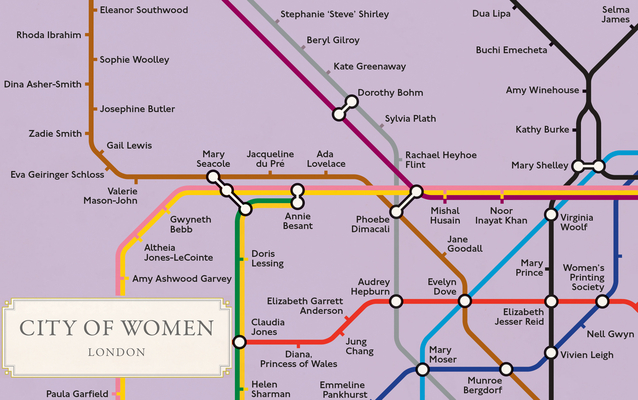 Londoners Reni Eddo-Lodge and Emma Watson are collaborating with author Rebecca Solnit and geographer Joshua Jelly-Schapiro to reimagine London's classic tube map. The new public history project 'City of London Women' will redraw Transport for London's underground map by naming each stop after a woman, non-binary person or a group who have had an impact on the city's history.

Produced and packaged as a large poster, this will be an ideal gift that will find a place in museums and art stores as well as bookshops across London and beyond. The women and non-binary people allocated to each station were identified through a multi-layered research process, beginning with an open call for suggestions. Some of these figures are household names while others are unsung heroes from London's hidden histories, yet each has a connection to the areas they have been allocated. The names are selected by the authors of this project, with input from an advisory group made up of academics, writers, activists and historians. The City of London Women map will be A2 size (42 cm x 59.4 cm).

Due to Covid restrictions, the launch of City of London Women has been delayed until International Women's Day 2022.

Reni Eddo-Lodge is an award winning journalist, author, and podcaster. Her debut non-fiction book, Why I'm No Longer Talking to White People About Race, was published in June 2017 to critical acclaim, becoming a Sunday Times bestseller, winning the 2018 Jhalak Prize, the 2018 Bread and Roses Award for Radical Publishing, and a 2018 British Book Award for Narrative Non Fiction, as well as multiple other awards and shortlistings. Her podcast, About Race with Reni Eddo-Lodge, was chosen as one of the best podcasts of 2018 by Apple Podcasts, Spotify, Harper's Bazaar UK, The Guardian, British GQ and Wired UK. In 2019, Reni's work earned her a place on Forbes' European 30 Under 30 list. In January 2018, British Vogue highlighted named her a 'new suffragette'. She has also been listed in Elle Magazine's 100 Inspirational Women list, and The Root's 30 black viral voices under 30. Emma Watson is an English actress, model, and activist. Her most recent film is Little Women, with her previous work including The Circle, Beauty and the Beast, Regression, and of course the iconic Harry Potter series. Her high-profile activism on women's rights has included a role as an United Nations Women's Goodwill Ambassador, through which she launched the HeForShe campaign, which calls on men to advocate gender equality. In 2014, the Ms. Foundation for Women name Watson as its Feminist Celebrity of the year, and she has been named in the Time 100 list of influential people. She has since launched a feminist Goodreads bookclub called Our Shared Shelf and, in 2019, a legal advice line for people suffering sexual harassment at work. Writer, historian, and activist Rebecca Solnit is the author of more than twenty books on feminism, western and indigenous history, popular power, social change and insurrection, wandering and walking, hope and disaster, including Call Them By Their True Names (Winner of the 2018 Kirkus Prize for Nonfiction), Cinderella Liberator, Men Explain Things to Me, The Mother of All Questions, and Hope in the Dark, and co-creator of the City of Women map, all published by Haymarket Books; a trilogy of atlases of American cities, The Faraway Nearby, A Paradise Built in Hell: The Extraordinary Communities that Arise in Disaster, A Field Guide to Getting Lost, Wanderlust: A History of Walking, and River of Shadows: Eadweard Muybridge and the Technological Wild West (for which she received a Guggenheim, the National Book Critics Circle Award in criticism, and the Lannan Literary Award). Her forthcoming memoir, Recollections of My Nonexistence, is scheduled to release in March, 2020. A product of the California public education system from kindergarten to graduate school, she is a columnist at the Guardian and a regular contributor to Literary Hub.