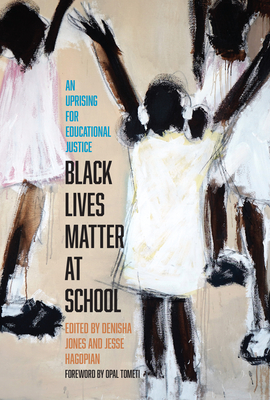 After a powerful webinar that included educators from ten cities explaining the many incredible actions they took in support of the national Black Lives Matter at School week of action, Denisha Jones, contacted Jesse Hagopian to propose that they collect these stories in a book. Black Lives Matter at School sucinctly generalizes lessons from successful challenges to institutional racism that have been won through the BLM at School movement. This is a book that can inspire many hundreds or thousands of more educators to join the BLM at School movement.

Denisha Jones is a steering committee member of Black Lives Matter at School and Director of Teacher Education and an Assistant Professor in the School of Education at Trinity Washington University in Washington, DC. She is a former early childhood teacher and preschool director. She received her Ph.D. from Indiana University in 2013 and her J.D. from the University of the District of Columbia in 2018. She has been active in the fight to stop the corporate takeover of public education since 2011. She is a board member for the Badass Teachers Association, Inc., United Opt Out National, and Defending the Early Years. Her research interests include teachers and public policy, the effects of school reform mandates on low-income children, preparing culturally competent teachers, and youth civic engagement. In 2015 she was the recipient of the Bammy Award for College Professor of the Year from the Academy of Education Arts and Sciences. Jesse Hagopian is a member of the Black Lives Matter at School steering committee and teaches Ethnic Studies at Seattle's Garfield High School. Jesse is an editor for Rethinking Schools magazine, the co-editor of the book, Teaching for Black Lives, and the editor of the book More Than a Score: The New Uprising Against High Stakes Testing. Jesse is a recipient of the 2013 "Secondary School Teacher of the Year" award and the Special Achievement "Courageous Leadership" award from the Academy of Education Arts and Sciences. In 2015, Jesse received the Seattle/King County NAACP Service Award. Jesse serves as the Director of the Black Education Matters Student Activist Award.