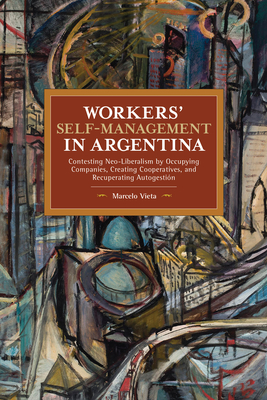 In Workers ' Self-Management in Argentina, Marcelo Vieta homes in on the emergence and consolidation of Argentina 's empresas recuperadas por sus trabajadores (ERTs, worker-recuperated enterprises), a workers ' occupy movement that surged at the turn-of-the-millennium in the thick of the country 's neo-liberal crisis. Since then, around 400 companies have been taken over and converted to cooperatives by almost 16,000 workers. Grounded in class-struggle Marxism and a critical sociology of work, the book situates the ERT movement in Argentina 's long tradition of working-class activism and the broader history of workers ' responses to capitalist crisis. Beginning with the voices of the movement 's protagonists, Vieta ultimately develops a compelling social theory of autogesti n -- a politically prefigurative and ethically infused notion of workers ' self-management that unleashes radical social change for work organisations, surrounding communities, and beyond.

Marcelo Vieta, Ph.D. (2012), York University, is Assistant Professor of Workplace and Organisational Learning and the Social Economy at the University of Toronto. He has published widely on critical theory, workers ' control and self-management, and on the social economy and social movements in Italy, Canada, Argentina, and Latin American.