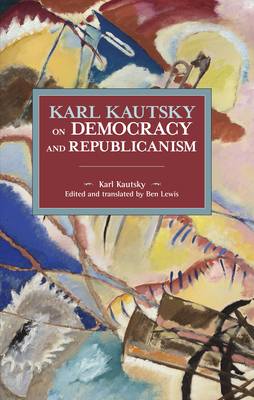 Karl Kautsky (1854-1938) was the leading theoretician of the German Social Democratic Party and one of the most prominent public intellectuals of his time. However, during the twentieth century a constellation of historical factors ensured that his ideas were either gradually consigned to near oblivion or downright reviled. Not only has his political thought been dismissed in non-Marxist historical and political discourse, but his ideas are equally discredited in Marxist circles.

This book aims to rekindle interest in Kautsky's ideas by exploring his democratic-republican understanding of state and society. These essential works from different points in his career demonstrates how Kautsky's republican thought was positively influenced by Marx and Engels--especially in relation to the lessons they drew from the experience of the Paris Commune.

Karl Kautsky (1854-1938) was the leading theoretician of the German Social Democratic Party and one of the most prominent public intellectuals of his time.Ben Lewis is a tutor and Wolfson Scholar PhD candidate in Germanic Studies at the University of Sheffield. His publications include Clara Zetkin: Letters and Writings (Merlin Press, 2015); Karl Kautsky on Colonialism (November Publications, 2013); and Martov and Zinoviev: Head-to-Head in Halle (November Publications, 2011).