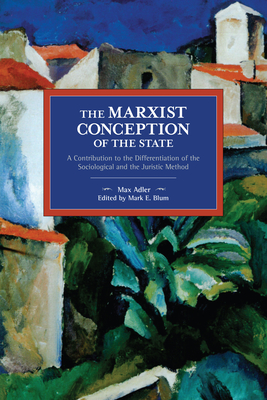 This translation of Max Adler's Die Staatsauffassung des Marxismus introduces English readers to an important and distinctive perspective on Marx's theory of the state, formed through Adler's experience of the tumultuous interwar period.

Adler's central target of critique is the notion of the law as the neutral arbiter of democratic society - a notion which, Adler contends, collapses in the face of an adequate understanding of the ruling class in capitalist society. Beyond providing an important historical survey of arguments over the nature of law and democracy that were conducted between the two World Wars, The Marxist Conception of the State offers contemporary readers a primer for comprehending any truly democratic future state might entail.

Max Adler, born January 15, 1873 in Vienna, Austria, studied law at the University of Vienna. Renowned as a Neo-Kantian Marxist, he was active in Austrian Social Democracy as both a politician and theoretician until his death in 1937. Mark E. Blum, Ph.D. (1970), University of Pennsylvania, is Professor of History at the University of Louisville. He has published monographs, translations and many articles on German and Austrian-German Marxists, including The Austro-Marxists 1890-1918, A Psychobiographical Study (University of Kentucky, 1985).