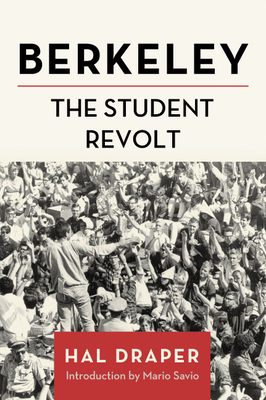 There's a time when the operation of the machine becomes so odious, makes you so sick at heart, that you can't take part You can't even passively take part And you've got to put your bodies upon the gears and upon the wheels ... upon the levers, upon all the apparatus, and you've got to make it stop

These fiery words of protest, spoken by Mario Savio during the Berkeley Free Speech Movement, became a call to action that helped galvanize an entire generation of radicals during the 1960s. Led by student politicized through the fight for Civil Rights, the movement would reshape the American left and influence a generation of protesters across the globe.

In this rousing and insightful participant's account, Hal Draper recounts the now iconic events of the FSM. From the impromptu speak out atop a police car after the administration decided to clamp down on students distributing communist literature, to the inspiring Student Strike that shut down the entire campus, Draper's narrative captures the energy and dynamism of each twist and turn in the struggle, and offers invaluable analysis along the way.

Brimming with lessons still relevant for today's activists, Berkeley: The New Student Rebellion is a classic of on-the-ground historical reportage.

The late Hal Draper is the author of the five-volume study of Karl Marx's Theory of Revolution (Monthly Review Press) as well as War and Revolution: Lenin and the Myth of Revolutionary Defeatism (Humanities Press) and Berkeley: The New Student Revolt (Grove Press.) He was also a prominent socialist journalist and editor of the journal Labor Action from 1948-1958.Mario Savio was one of the most famous leaders of the Berkeley Free Speech Movement.