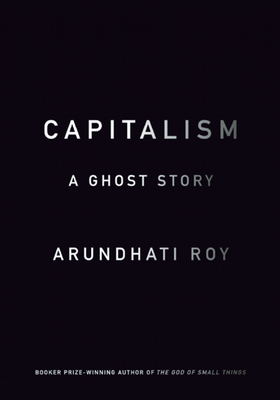 From the poisoned rivers, barren wells, and clear-cut forests, to the hundreds of thousands of farmers who have committed suicide to escape punishing debt, to the hundreds of millions of people who live on less than two dollars a day, there are ghosts nearly everywhere you look in India. India is a nation of 1.2 billion, but the country's 100 richest people own assets equivalent to one-fourth of India's gross domestic product.

Capitalism: A Ghost Story examines the dark side of democracy in contemporary India, and shows how the demands of globalized capitalism has subjugated billions of people to the highest and most intense forms of racism and exploitation.

Arundhati Roy studied architecture in New Delhi, where she now lives. She is the author of the novel The God of Small Things, for which she received the 1997 Booker Prize. The novel has been translated into forty languages worldwide. She has written several non-fiction books, including Field Notes on Democracy: Listening to Grasshoppers and Capitalism: A Ghost Story, published by Haymarket Books.