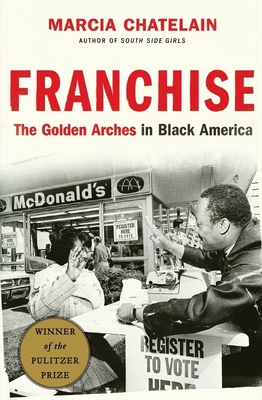 From civil rights to Ferguson, Franchise reveals the untold history of how fast food became one of the greatest generators of black wealth in America.

An estimated one-third of all American adults eats something from at a fast-food restaurant every day. Millions start their mornings with paper-wrapped English muffin breakfast sandwiches, order burritos hastily secured in foil for lunch, and end their evenings with extravalue dinners consumed in cars. But while people of all ages and backgrounds enjoy and depend on fast food, it does not mean the same thing to each of us. For African Americans, as acclaimed historian Marcia Chatelain reveals in Franchise, fast food is a source of both despair and power—and a battlefield on which the fight for racial justice has been waged since the 1960s.

On the one hand, we rightly blame fast food for the rising rates of obesity and diabetes among black Americans, and fast food restaurants are viewed as symbols of capitalism’s disastrous effects on our nation’s most vulnerable citizens. Yet at the same time, Chatelain shows, fast food companies, and McDonald’s in particular, have represented a source of economic opportunity and political power. After Martin Luther King, Jr.’s assassination in 1968, many activists turned to entrepreneurship as the means to achieving equality. Civil rights leaders, fast food companies, black capitalists, celebrities, and federal bureaucrats began an unlikely collaboration, in the belief that the franchising of fast food restaurants, by black citizens in their own neighborhoods, could improve the quality of black life.

Equipped with federal loans and utterly committed to the urban centers in which they would open their little sites of hope, black franchise pioneers achieved remarkable success, and by the late 2000s, black-franchised McDonald’s restaurants reported total sales exceeding $2 billion. Fast food represented an opportunity for strivers who had been shut out of many industries, denied promotions in those that would tolerate them, and discouraged, in numerous ways, from starting their own businesses, all because of the color of their skin. But a parallel story emerged, too—of wealth being extracted from black communities, of the ravages of fast food diets, of minumum wage jobs with little prospect for advancement.

Taking us from the first McDonald’s drive-in in San Bernardino in the 1940s to civil rights protests at franchises in the American South in the 1960s and the McDonald’s on Florissant Avenue in Ferguson in the summer 2014, Chatelain charts how the fight for racial justice is intertwined with the fate of black businesses. Deeply researched and brilliantly told, Franchise is an essential story of race and capitalism in America.

Marcia Chatelain is a professor of history and African American studies at Georgetown University, and is a leading public voice on the history of race, education, and food culture. The author of South Side Girls, Chatelain lives in Washington, DC.

[A] smart and capacious history. . . . Throughout this impressively judicious book, [Chatelain] is attuned to the circumstances that encouraged increasingly intricate ties between McDonald’s and black communities across the country. This isn’t just a story of exploitation or, conversely, empowerment; it’s a cautionary tale about relying on the private sector to provide what the public needs, and how promises of real economic development invariably come up short. . . . Franchise is a serious work of history. . . . [Chatelain's] sense of perspective gives this important book an empathetic core as well as analytical breadth, as she draws a crucial distinction between individuals actors, who often get subjected to so much scrutiny and second-guessing, and larger systems, which rarely get subjected to enough.

An impeccably researched examination of McDonald’s and how the franchise was once intended as a path to economic freedom in Black communities. A fascinating, overlooked perspective on a US institution.
— Karla Strand, Ms. Magazine

Well-written... Emphasizes how today’s conversations around fast food in America were shaped by government policies, and examines how the fast-food industry is connected to Black Lives Matter and other social change movements.... Invaluable for those studying the intersections of race, economics, and business in the United States.
— Sarah Schroeder, Library Journal

Chatelain makes a convincing case that racial tension, the civil rights movement, and fast food all combined to change the dynamic of mostly black communities ignored by white power structures. Chatelain’s impressive research and her insertion of editorial commentary will prove educational and enlightening for readers of all backgrounds. An eye-opening and unique history lesson.
— Kirkus Reviews

Franchise is a stunning story of post-1960s urban black America, a tale of triumph and good intentions, but also of tragic consequences for race relations, poverty, and dietary health. Marcia Chatelain has done superb research and writes as a great storyteller. This is an important book, showing that civil rights successes led to burgers under black ownership as much as ballots for social change. Chatelain makes us see black capitalism in all its mixed blessings.

Thanks to Marcia Chatelain, I’ll never look at fast food the same way. She pairs burgers and fries with civil rights and black wealth, showing readers exactly what ‘opportunity’ in America really looks like.
— Alexis Coe, author of You Never Forget Your First: A Biography of George Washington

Marcia Chatelain uses the complex interrelationship of black communities with McDonald’s to explore the history of American racism and the struggle for civil rights. Franchise is an eye-opener for anyone who cares about why diet-related chronic disease is more prevalent in these communities and what it is really like to be black in America.